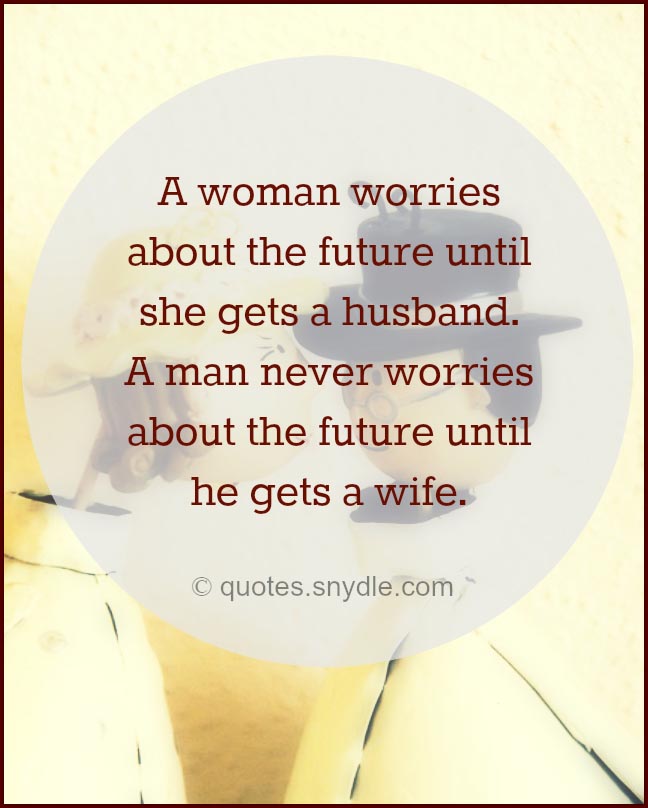 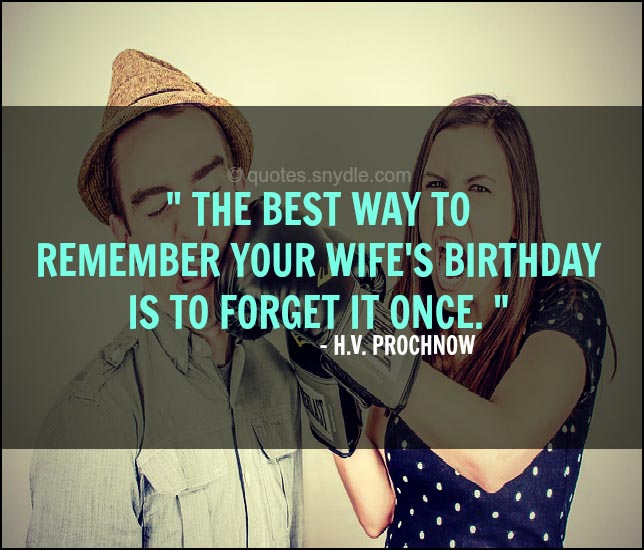 The best way to remember your wife’s birthday is to forget it once.
-H.V. Prochnow 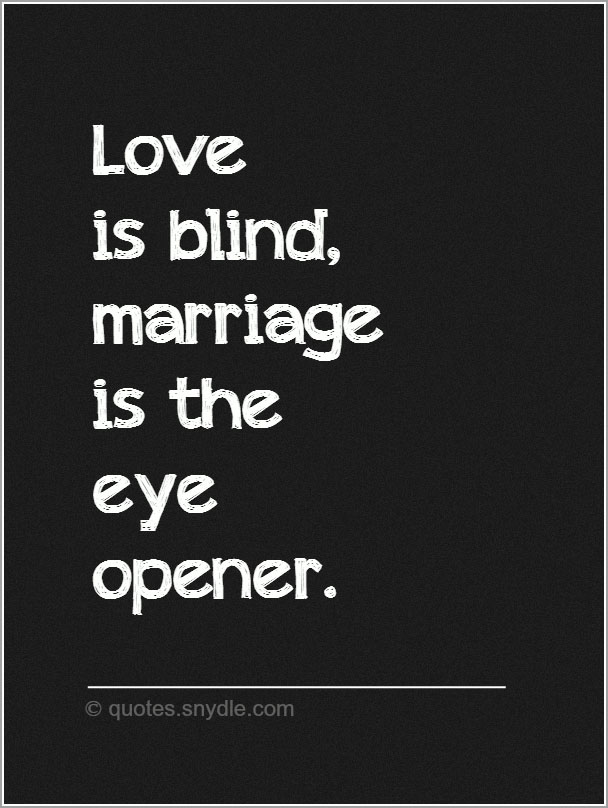 Love is blind, marriage is the eye-opener.
– Unknown 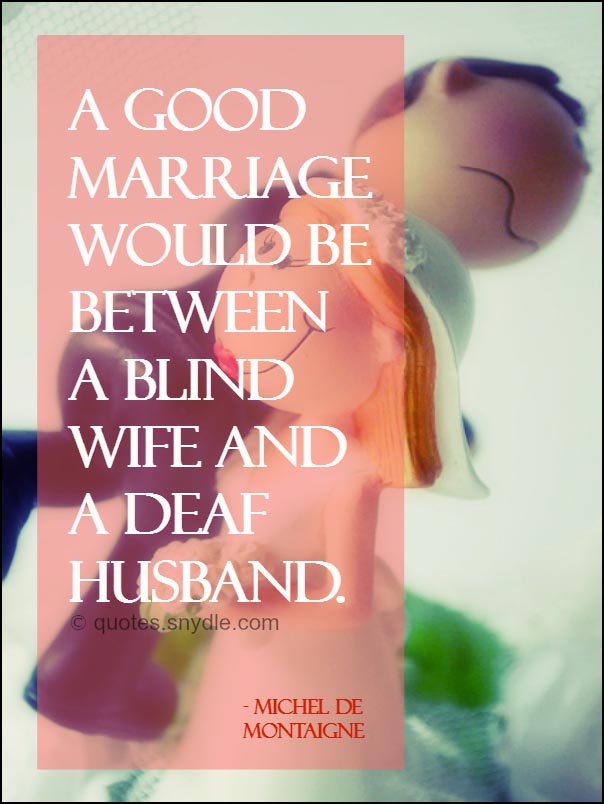 A good marriage would be between a blind wife and a deaf husband.
– Michel de Montaigne

One day my wife’s credit card got stolen.. what a relief it was to find that the thief spends less than my wife!
– Anonymous 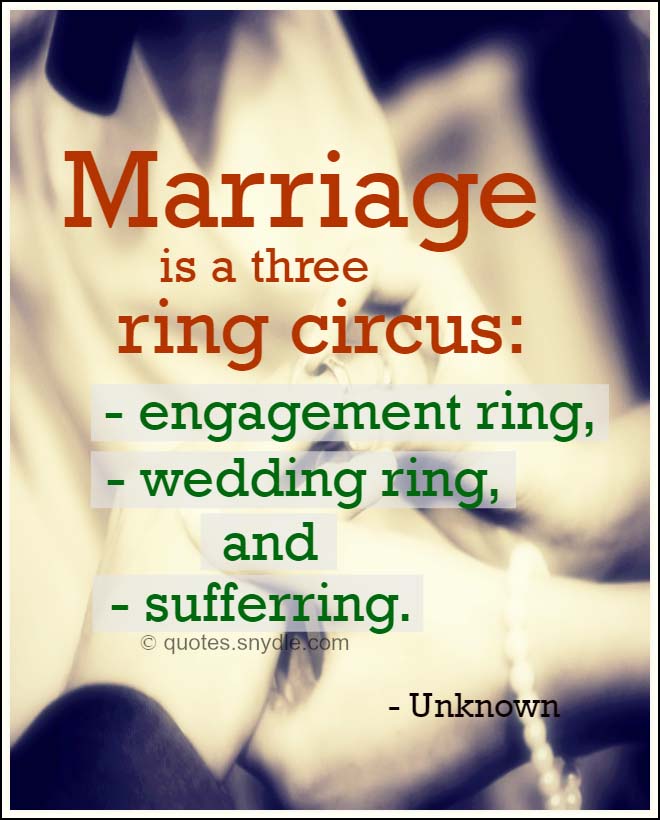 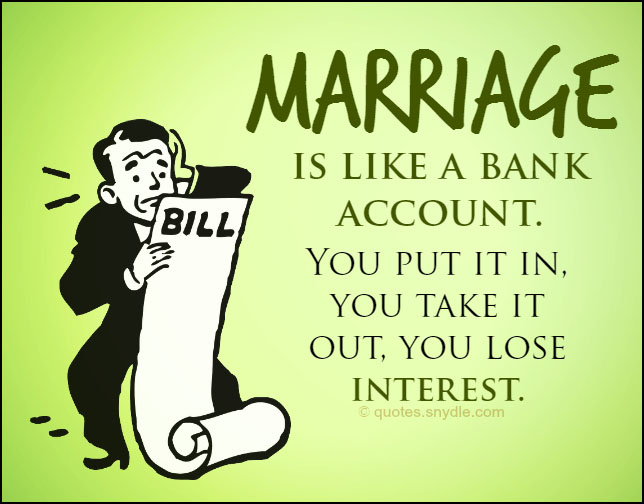 Marriage is like a bank account. You put it in, you take it out, you lose interest.
– Anonymous

Every man wants a wife who is beautiful, understanding, economical, and a good cook. But the law allows only one wife.
– Unknown

The four most important words in any marriage…”I’ll do the dishes.”
– Anonymous

Marriage marks the end of a love story and the start of a wrestling match. Wishing you the very best of everything anyway.
– Anonymous 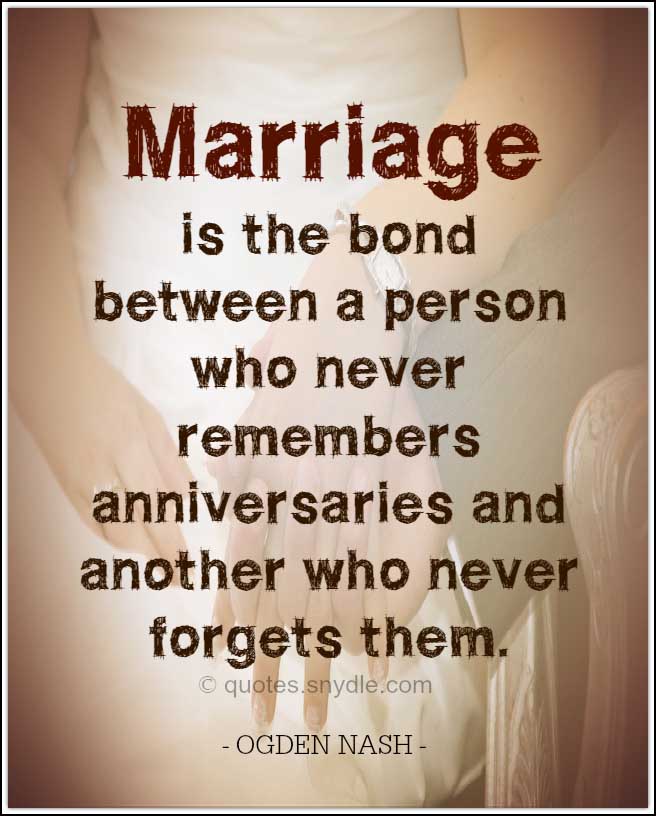 Marriage is the bond between a person who never remembers anniversaries and another who never forgets them.
– Ogden Nash

If you want your wife to listen to you, then talk to another woman; she will be all ears.
– Sigmund Freud

Marriage is like a poker game. You start out with a pair. She shows a heart. He flashes a diamond. She gets a flush. And he ends up with a full house and a big pot!!
– Ken Murray

I not spoken to my wife for 18 months. I did not like to interrupt her.
– Unknown

Marriage is give and take. You’d better give it to her or she’ll take it anyway.
-Joey Adams

People say you cant live without love, but I think oxygen is more important.
– Anonymous

When a man opens the car door for his wife, it’s either a new car or new wife.
– Prince Philip 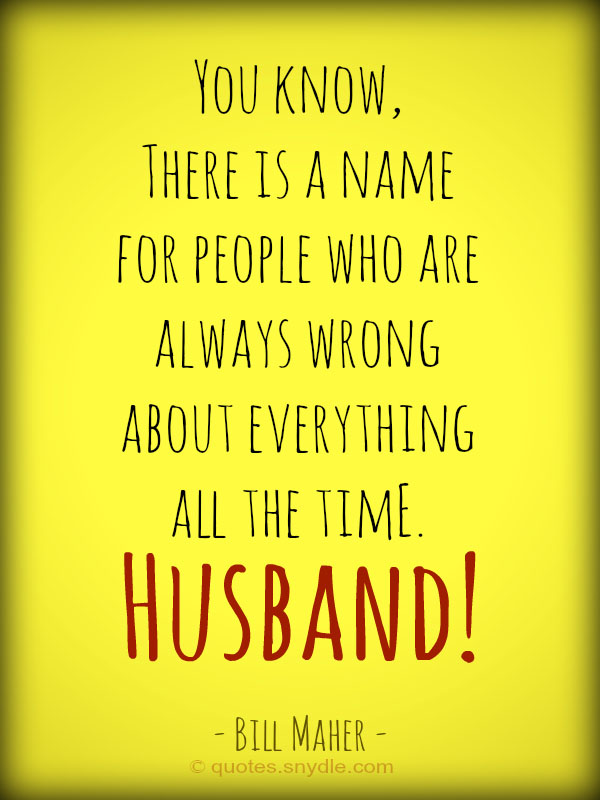 You know… There is a name for people who are always wrong about everything all the time… Husband!
– Bill Maher 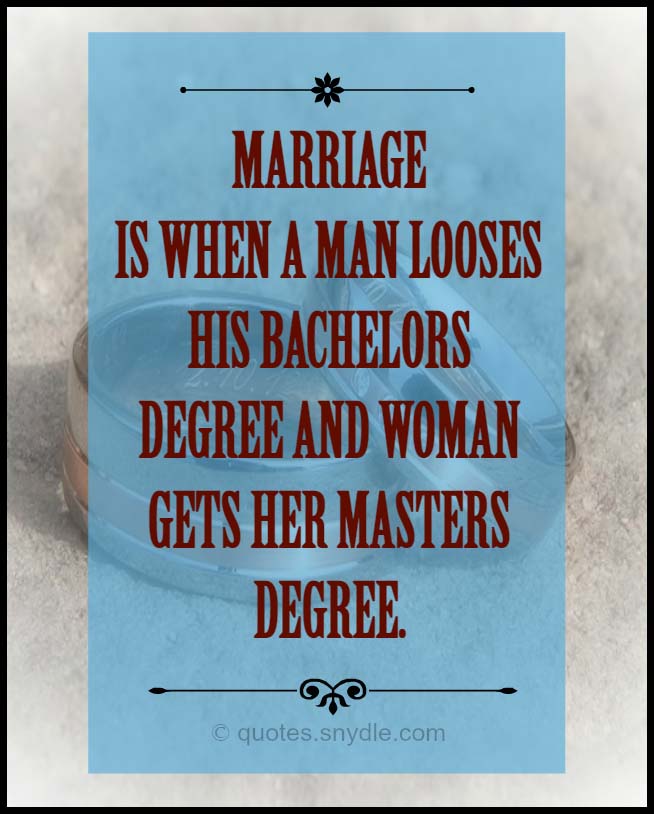 Marriage is when a man looses his bachelors degree and woman gets her masters degree.
– Unknown 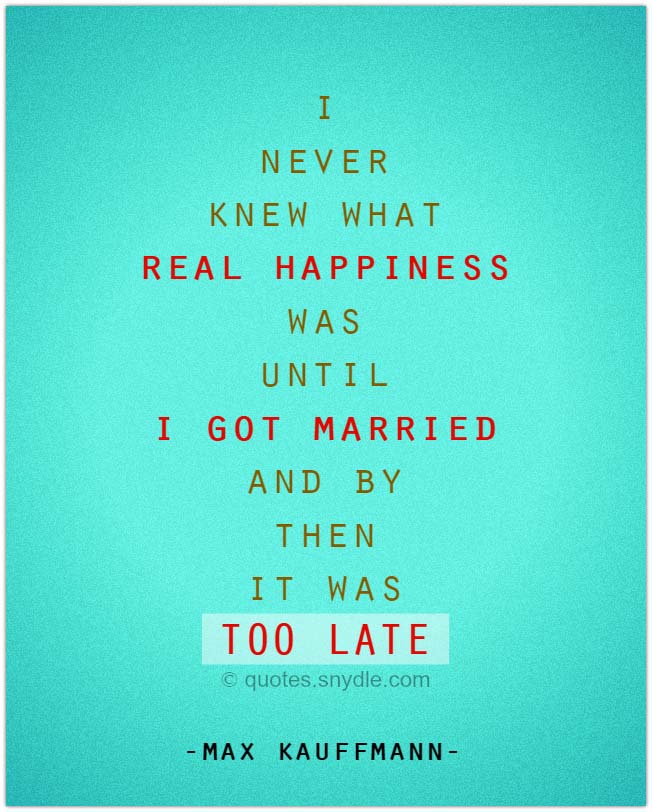 I never knew what real happiness was until I got married. And by then it was too late.
-Max Kauffmann

There’s a way of transferring funds that is even faster than electronic banking. It’s called marriage.
– James Holt McGavran

A wedding is just like a funeral except that you get to smell your own flowers.
– Grace Hansen 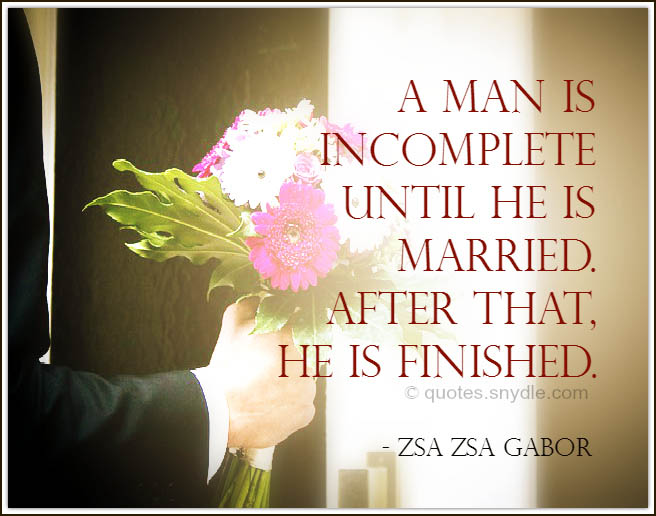 A man is incomplete until he is married. After that, he is finished.
– Zsa Zsa Gabor 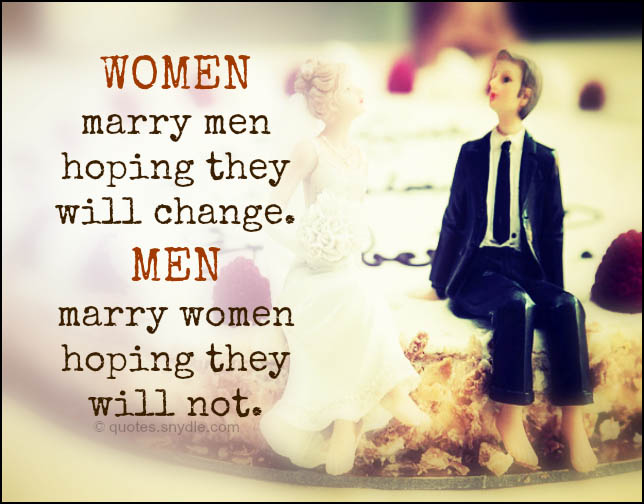 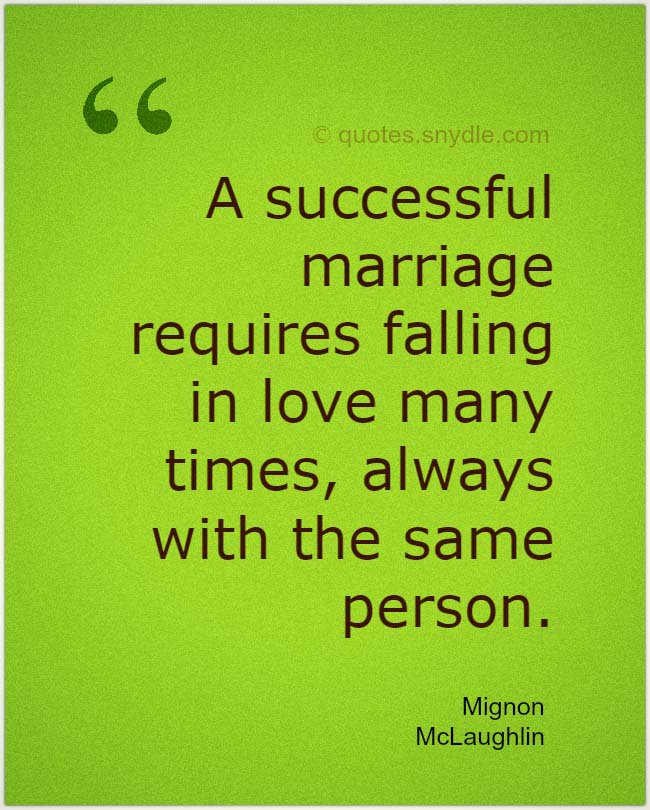 A successful marriage requires falling in love many times, always with the same person.
– Mignon McLaughlin

To avoid mistakes and regrets, always consult your wife before engaging in a filtration.
– E. W. Howe

Chains do not hold a marriage together. It is threads, hundreds of tiny threads which sew people together through the years.
– Simone Signoret

Married men live longer, but they are also more willing to die in more than one way!
– Anonymous

Marriage is a sacred institution, everyone who does it ends up with their own private room eventually.
– Frank Insana

Before you got married, you were madly in love with each other. Now you will’be be mad at each other as well.
– Anonymous

To keep the fire burning brightly there’s one easy rule: Keep the two logs together, near enough to keep each other warm and far enough apart – about a finger’s breadth – for breathing room. Good fire, good marriage, same rule.
– Marnie Reed Crowell

Funny Quotes on Marriage and Love 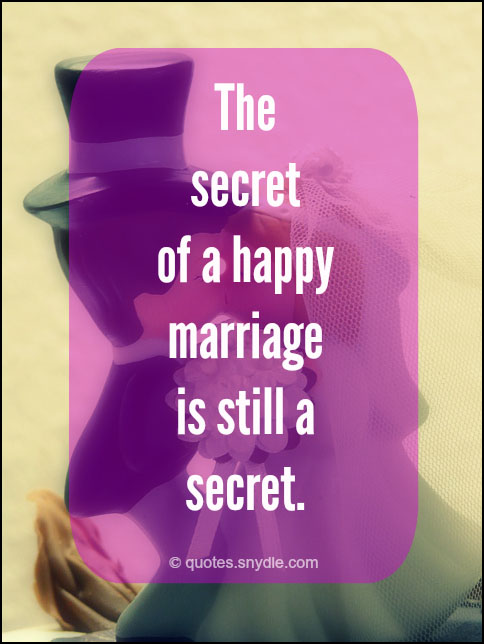 The secret of a happy marriage is still a secret.
– Anonymous

My wife is a psychologist…not only does she know when I’m being a jerk, but she knows exactly what type of jerk I’m being.
– Lee Judge

I love being married. It’s so great to find one special person you want to annoy for the rest of your life.
– Rita Rudner 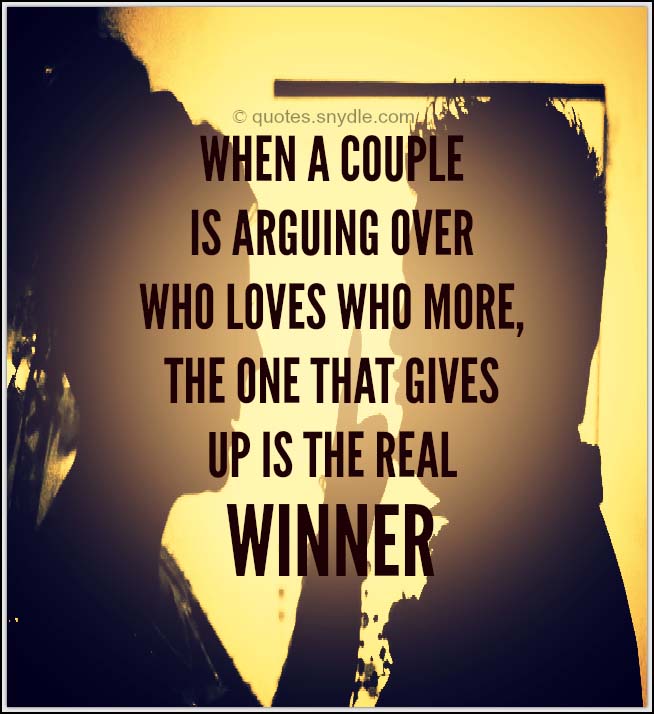 When a couple is arguing over who loves who more, the one that gives up is the real winner.
– Unknown

Before marriage, a man will lie awake all night thinking about something you said; after marriage, he’ll fall sleep before you finish saying it.
– Unknown

A kiss is a lovely trick, designed by nature, to stop words when speech becomes superfluous.
– Ingrid Bergmen

An archaeologist is best husband a woman can have: the older she gets, the more interested he is in her.
– Agatha Christie

Whatever you may look like, marry a man your own age – as your beauty fades, so will his eyesight.
– Phyllis Diller

Love is blind, but marriage restores its sight.
– George Lichtenberg

No married man is genuinely happy if he has to drink worse whisky than he used to drink when he was single.
– H.L. Mencken