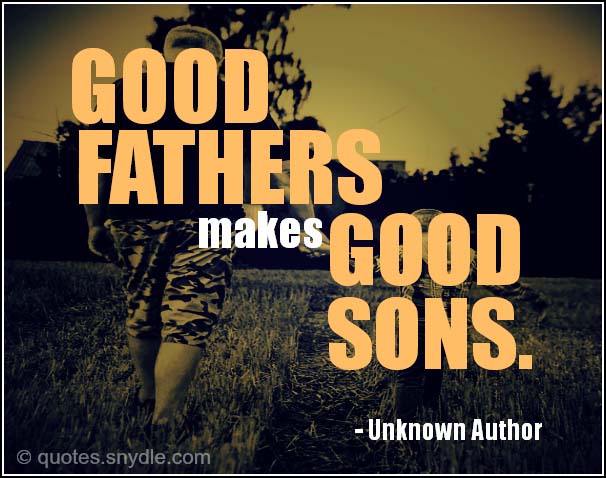 You are my sonshine.
– Author Unknown 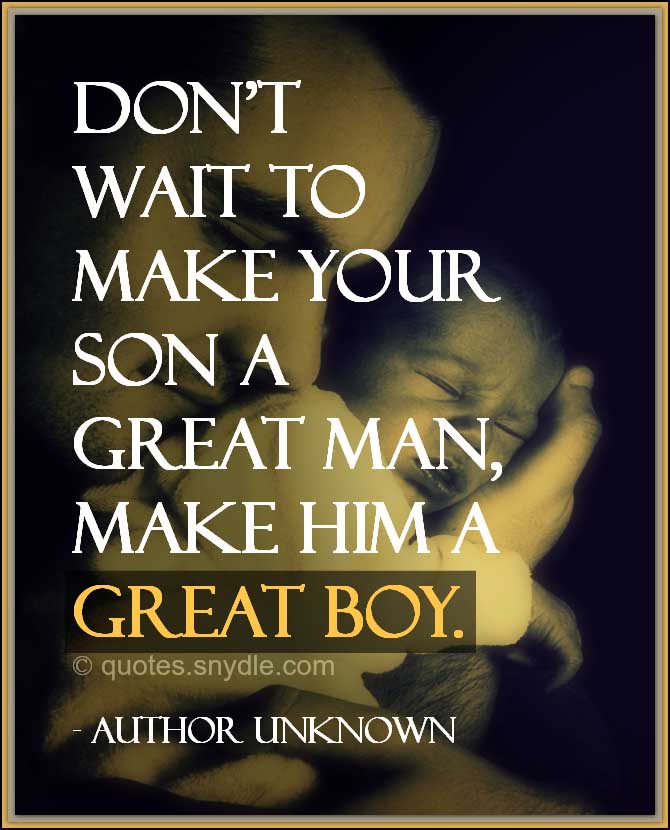 Don’t wait to make your son a great man – make him a great boy.
– Author Unknown 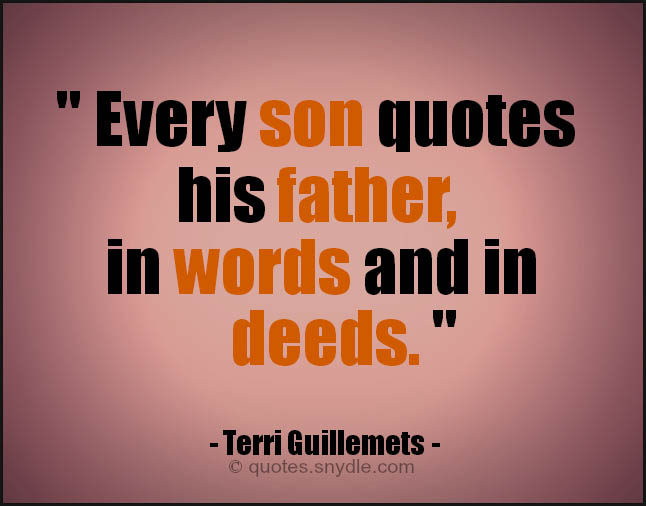 Every son quotes his father, in words and in deeds.
– Terri Guillemets

Son, you outgrew my lap, but never my heart.
– Author Unknown 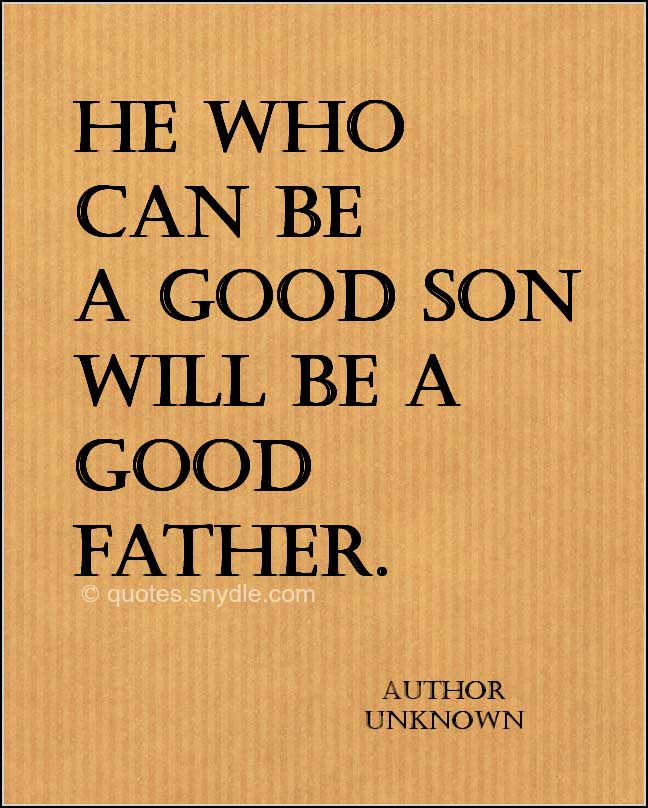 He who can be a good son will be a good father.
– Author Unknown 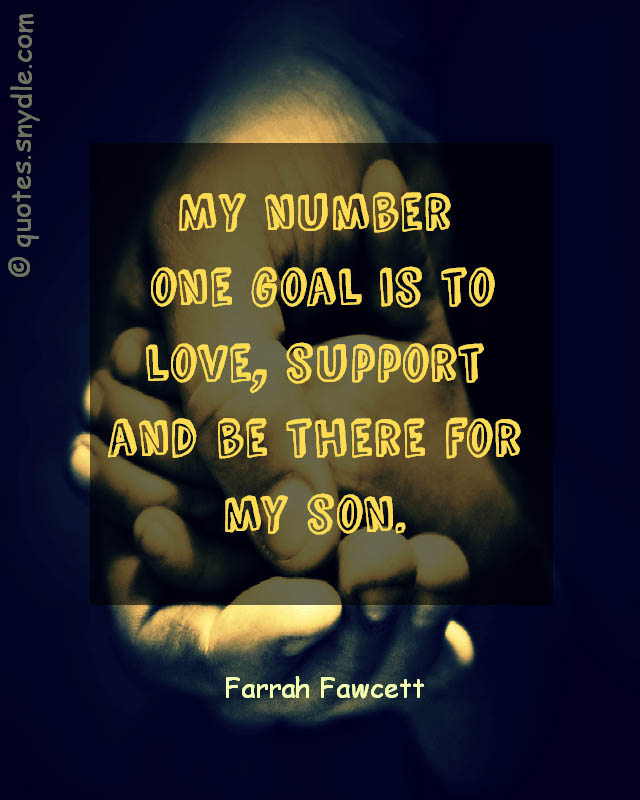 My number one goal is to love, support and be there for my son.
– Farrah Fawcett 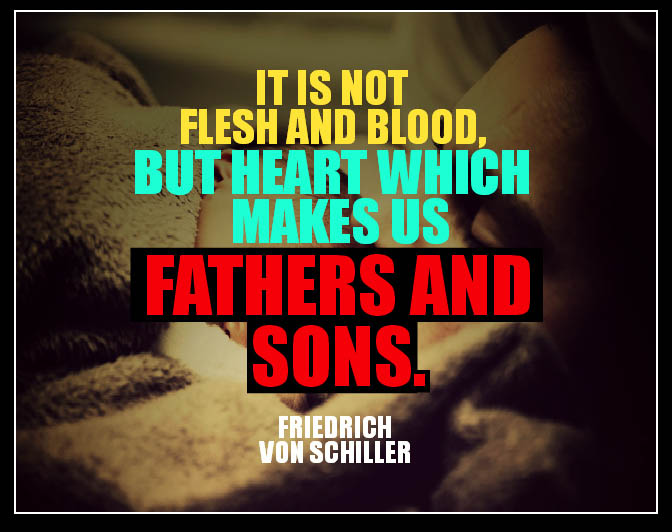 It is not flesh and blood, but heart which makes us fathers and sons.
– Friedrich von Schiller 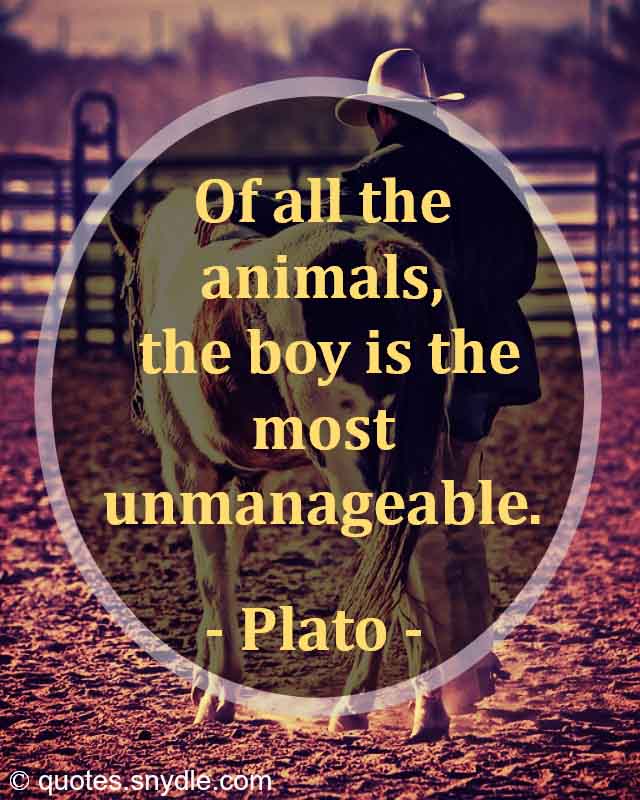 Of all the animals, the boy is the most unmanageable.
– Plato 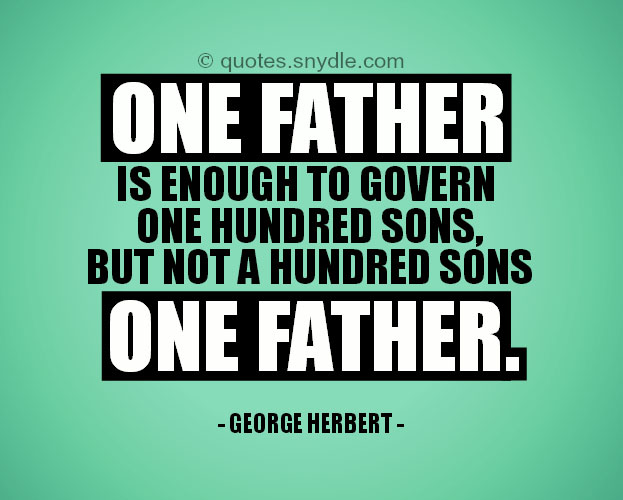 One father is enough to govern one hundred sons, but not a hundred sons one father.
– George Herbert

The father is always a Republican toward his son, and his mother’s always a Democrat.
– Robert Frost

You don’t raise heroes, you raise sons. And if you treat them like sons, they’ll turn out to be heroes, even if it’s just in your own eyes.
– Walter M. Schirra, Sr. 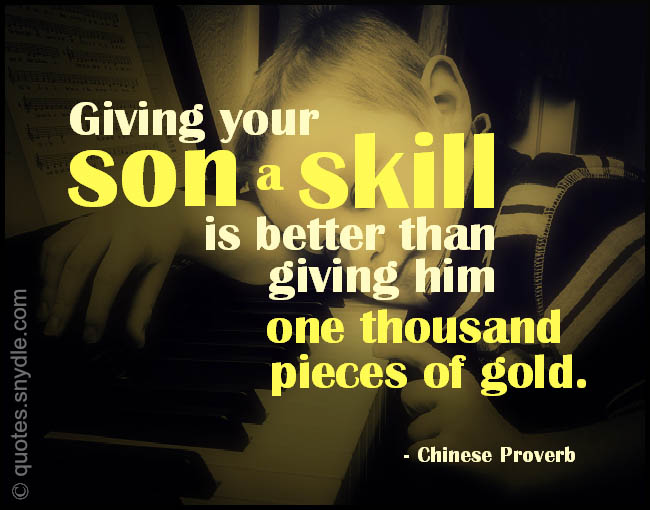 Giving your son a skill is better than giving him one thousand pieces of gold.
– Chinese Proverb

We think our fathers fools, so wise we grow. Our wiser sons, no doubt will think us so.
– Alexander Pope

If a man has been his mother’s undisputed darling he retains throughout life the triumphant feeling, the confidence in success, which not seldom brings actual success along with it.
– Sigmund Freud

I wish to impress these matters upon you, because you are the eldest of your father’s family. The oldest son should consider himself the second father of the family.
– Washington Irving, letter to Pierre Paris Irving (nephew), 1824 December 7th

A son is a son till he takes him a wife, a daughter is a daughter all of her life.
– Author Unknown

Boys will be boys. And even that wouldn’t matter if only we could prevent girls from being girls.
– Anne Frank 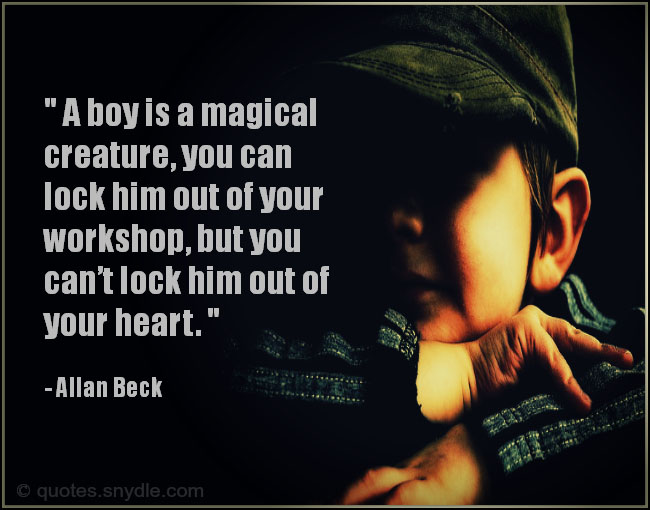 What was silent in the father speaks in the son, and often I found in the son the unveiled secret of the father.
– Friedrich Nietzsche

By the time a man realizes that maybe his father was right, he usually has a son who thinks he’s wrong.
– Charles Wadsworth

I must study politics and war that my sons may have liberty to study mathematics and philosophy….
– John Adams

We’ve begun to raise daughters more like sons… but few have the courage to raise our sons more like our daughters.
– Gloria Steinem

No one would be foolish enough to choose war over peace – in peace sons bury their fathers, but in war fathers bury their sons.
– Croesus of Lydia 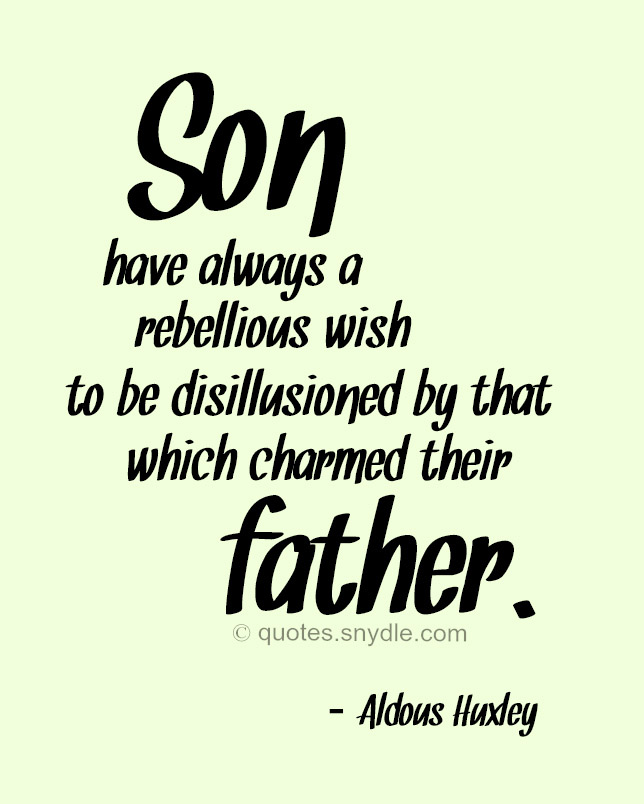 Sons have always a rebellious wish to be disillusioned by that which charmed their fathers.
– Aldous Huxley 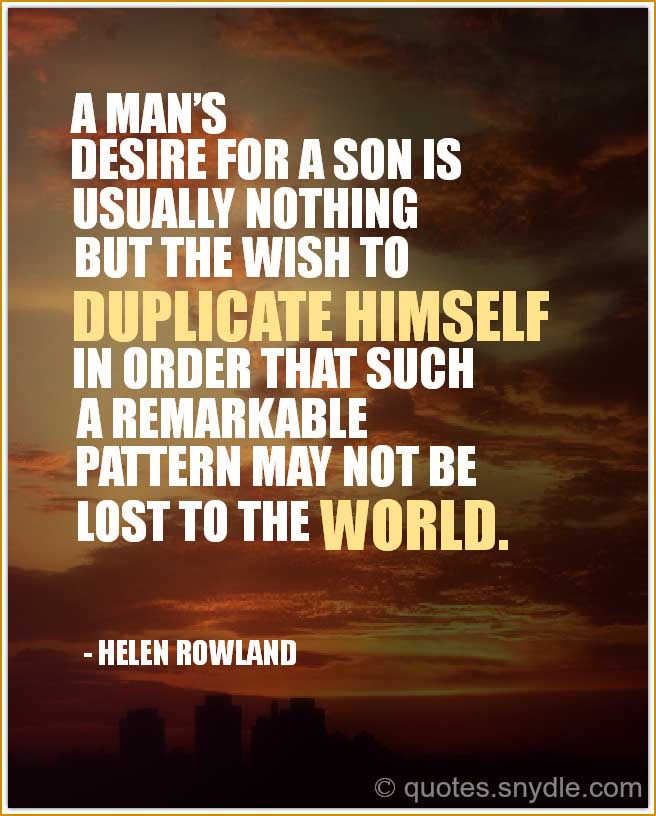 A man’s desire for a son is usually nothing but the wish to duplicate himself in order that such a remarkable pattern may not be lost to the world.
– Helen Rowland

Every mother hopes that her daughter will marry a better man than she did, and is convinced that her son will never find a wife as good as his father did.
– Martin Andersen-Nexö

Man’s pity for himself, or for his son,
Always premising that said son at college
Has not contracted much more debt than knowledge.
– Author Unknown 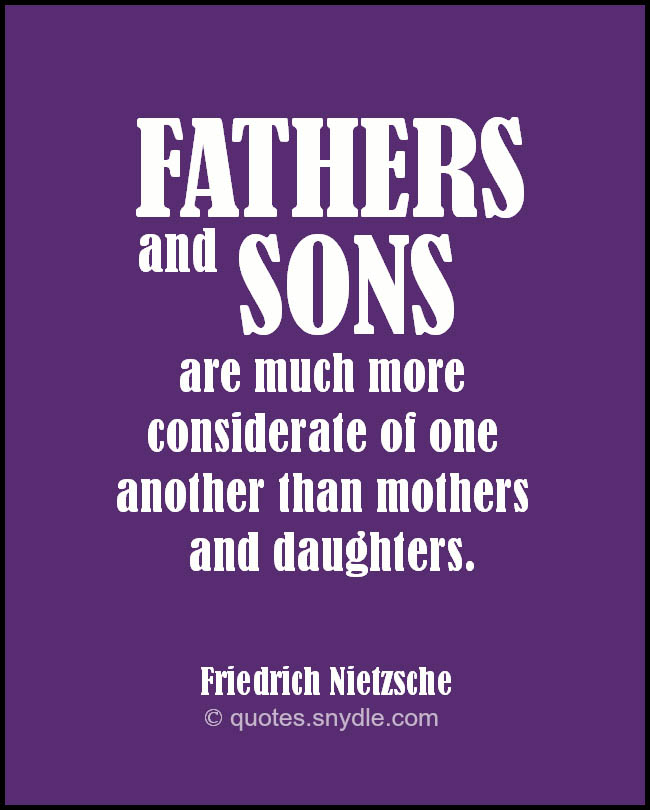 Fathers and sons are much more considerate of one another than mothers and daughters.
– Friedrich Nietzsche

Let France have good mothers, and she will have good sons.
– Napoleon Bonaparte

If the relationship of father to son could really be reduced to biology, the whole earth would blaze with the glory of fathers and sons.
– James Baldwin

Your son at five is your master, at ten your slave, at fifteen your double, and after that, your friend or your foe, depending on his bringing up.
– Author Unknown

Your children are not your children. They are the sons and daughters of Life’s longing for itself.
– Kahlil Gibran 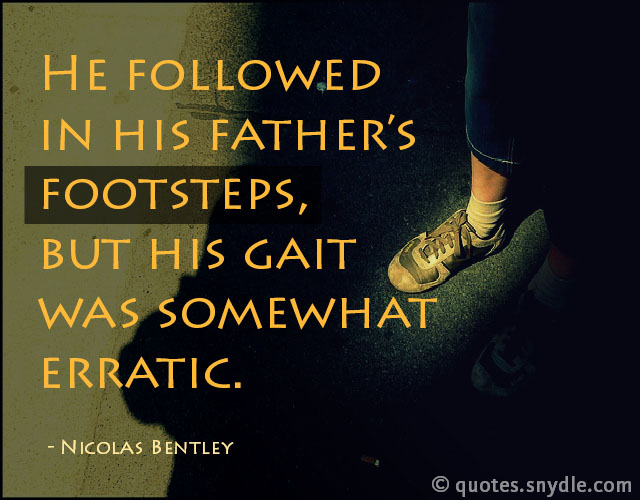 He followed in his father’s footsteps, but his gait was somewhat erratic.
– Nicolas Bentley

Be careful to leave your sons well instructed rather than rich, for the hopes of the instructed are better than the wealth of the ignorant.
– Epictetus

On the green they watched their sons
Playing till too dark to see,
As their fathers watched them once,
As my father once watched me
– Edmund Blunden

A king, realizing his incompetence, can either delegate or abdicate his duties. A father can do neither. If only sons could see the paradox, they would understand the dilemma.
– Marlene Dietrich 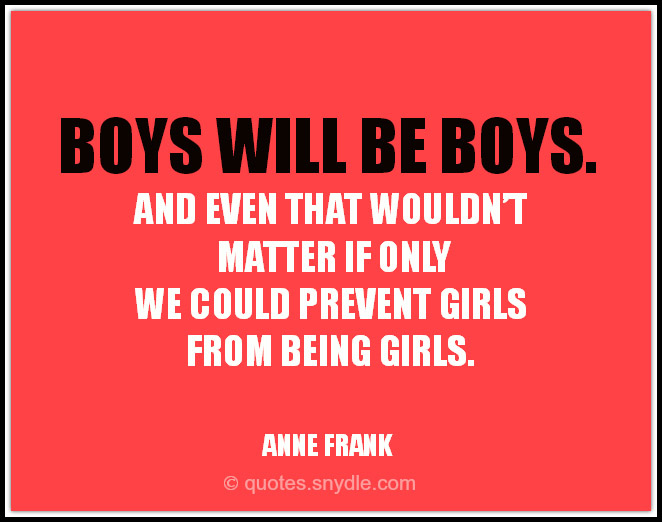 Boys are beyond the range of anyone’s sure understanding, at least when they are between the ages of 18 months and 90 years.
– James Thurber