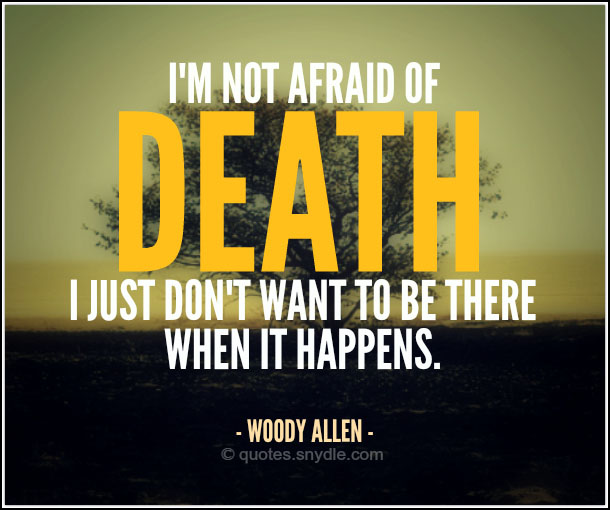 I’m not afraid of death; I just don’t want to be there when it happens.
– Woody Allen 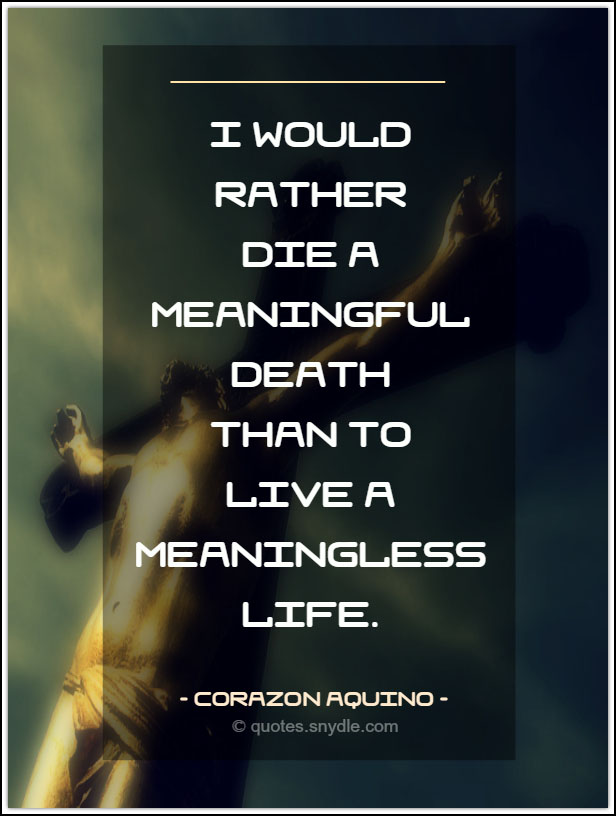 I would rather die a meaningful death than to live a meaningless life.
– Corazon Aquino

Don’t send me flowers when I’m dead. If you like me, send them while I’m alive.
– Brian Clough 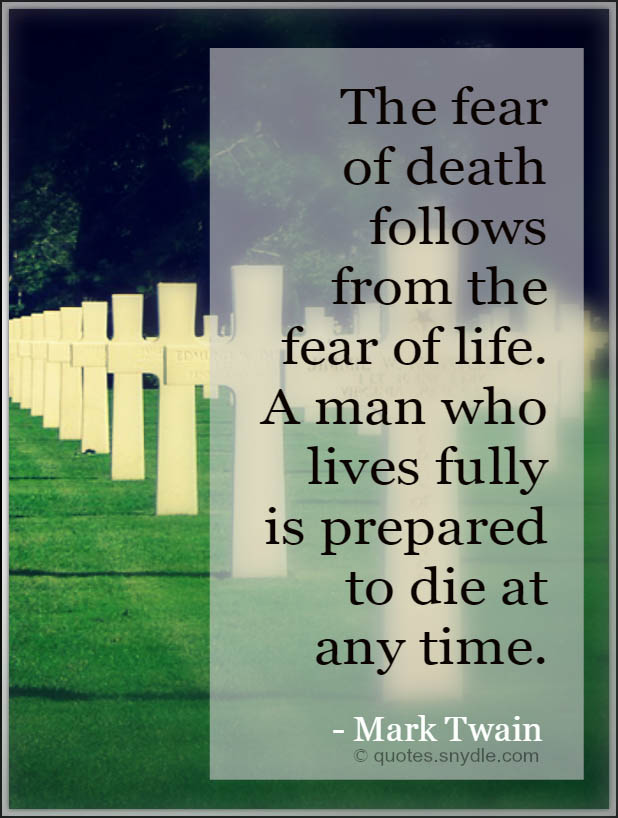 Some people are so afraid to die that they never begin to live.
– Henry Van Dyke

Death is the surest calculation that can be made.
– Ludwig Büchner

Why fear death? It is the most beautiful adventure in life.
– Charels Frohman

Death ends a life, not a relationship.
– Mitch Albom

The goal of all life is death.
– Sigmund Freud 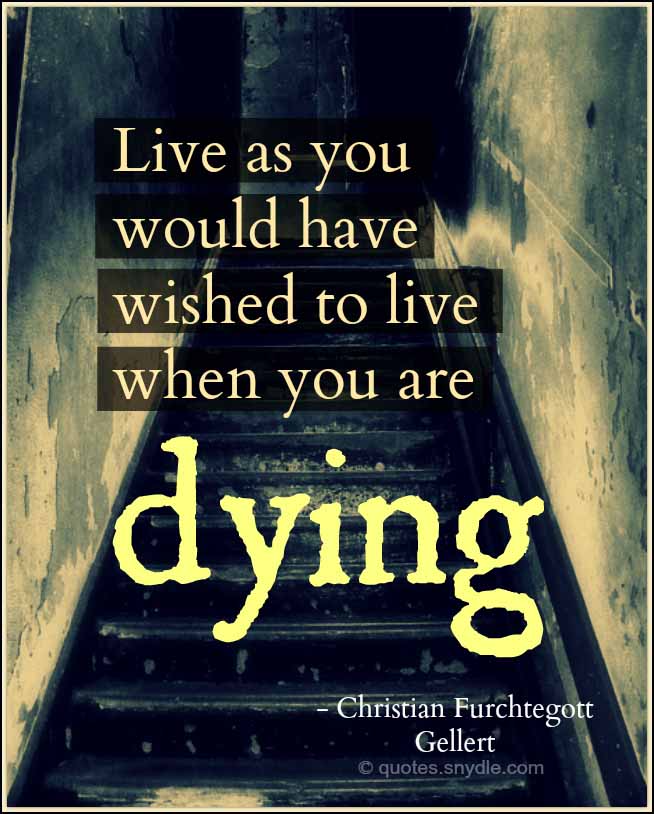 Live as you would have wished to live when you are dying.
– Christian Furchtegott Gellert

Live your own life, for you will die your own death.
– Latin Proverb

Death is a law, not a punishment.
– Jean Dubos 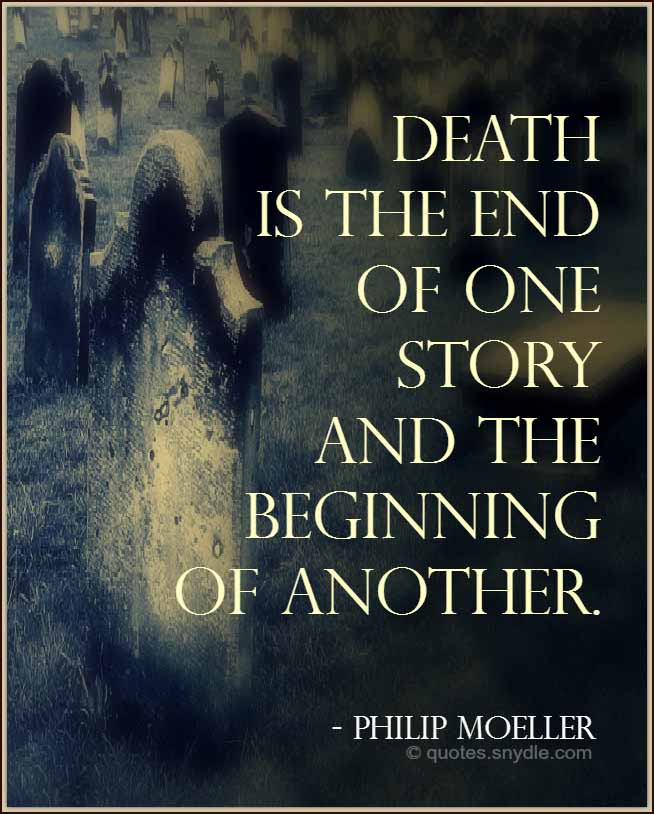 Death is the end of one story and the beginning of another.
– Philip Moeller

It’s better to die laughing than to live each moment in fear.
– Michael Crichton

It is a blessing to die for a cause, because you can so easily die for nothing.
– Andrew Young 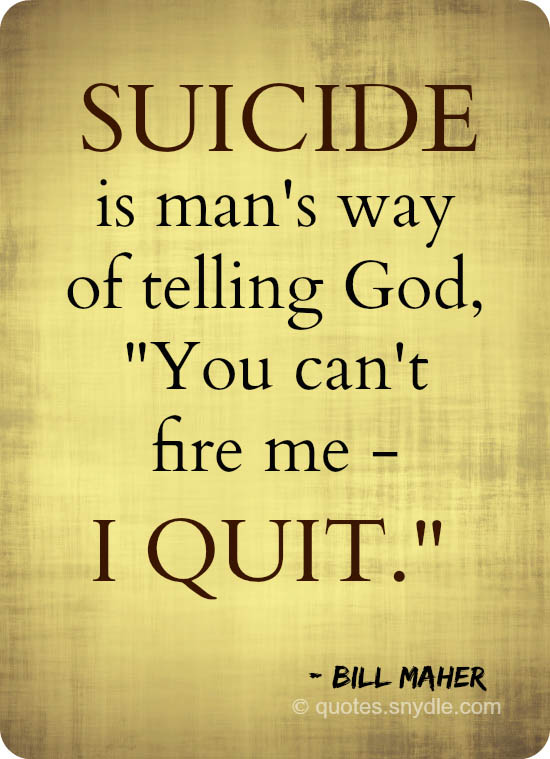 Suicide is man’s way of telling God, “You can’t fire me — I quit.
– Bill Maher 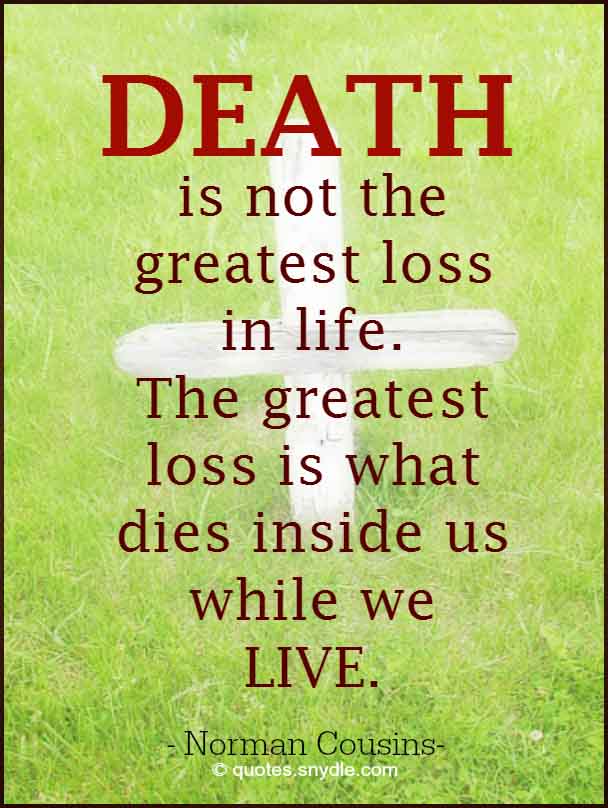 I’m not afraid of death. It’s the stake one puts up in order to play the game of life.
– Jean Giraudoux

The fear of death is the most unjustified of all fears, for there’s no risk of accident for someone who’s dead.
– Albert Einstein

God pours life into death and death into life without a drop being spilled.
– Author Unknown 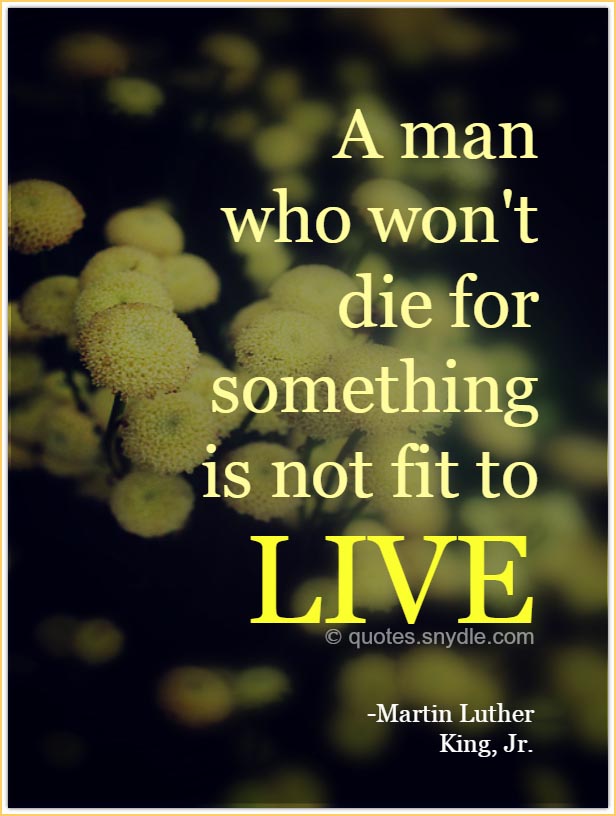 A man who won’t die for something is not fit to live.
– Martin Luther King, Jr.

Surely it was a good way to die, in the place of someone else, someone I loved.
– Stephenie Meyer

The dead are never truly gone. They linger in our minds and hearts and torture us with a malice they were not capable of in life.
– Courtney M. Privett

To the well-organized mind, death is but the next great adventure.
– J.K. Rowling, Harry Potter and the Sorcerer’s Stone

Death is the last enemy: once we’ve got past that I think everything will be alright.
– Alice Thomas Ellis

It is nothing to die. It is frightful not to live.
– Victor Hugo 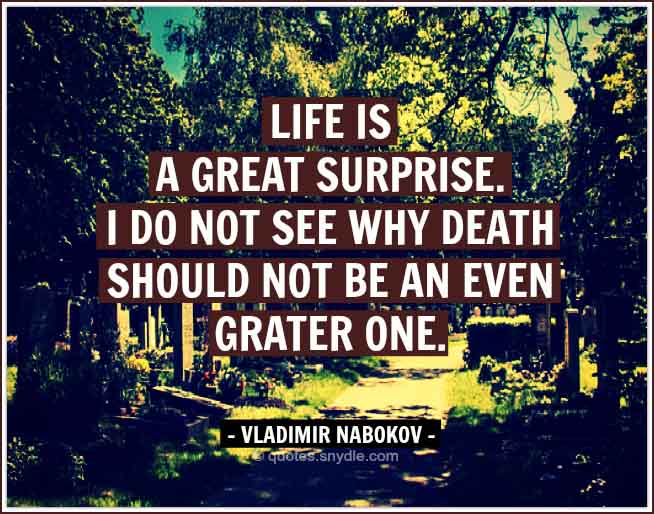 Life is a great surprise. I do not see why death should not be an even grater one.
– Vladimir Nabokov

It is said that your life flashes before your eyes just before you die. That is true, it’s called Life.
– Terry Pratchett

Death is a delightful hiding place for weary men.
– Herodotus

Some people are so afraid do die that they never begin to live.
– Henry Van Dyke

Death was a smokescreen between life and myself.
– B.G. Bowers

You don’t know how easy death is. It’s – it’s like a door. A person simply walks through it, and she’s lost to you forever.
– Eloisa James 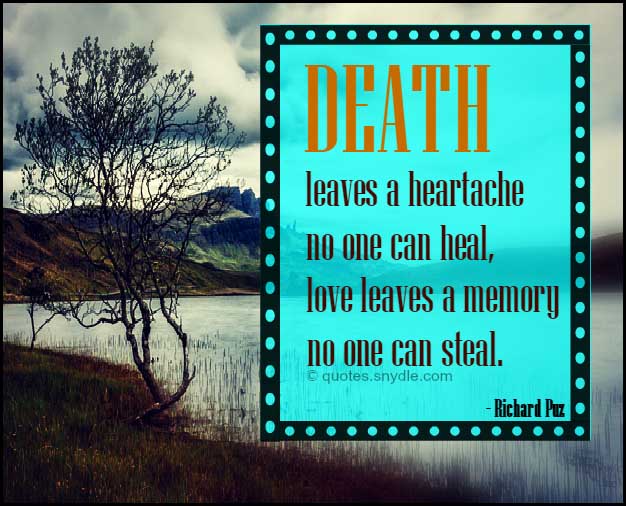 Death leaves a heartache no one can heal, love leaves a memory no one can steal.
– Richard Puz

Death is nothing, but to live defeated and inglorious is to die daily.
– Napoleon Bonaparte

A thing is not necessarily true because a man dies for it.
– Oscar Wilde

It is difficult to accept death in this society because it is unfamiliar. In spite of the fact that it happens all the time, we never see it.
– Elisabeth Kubler-Ross

We understand death for the first time when he puts his hand upon one whom we love.
– Madame de Stael

A dying man needs to die, as a sleepy man needs to sleep, and there comes a time when it is wrong, as well as useless, to resist.
– Stewart Alsop 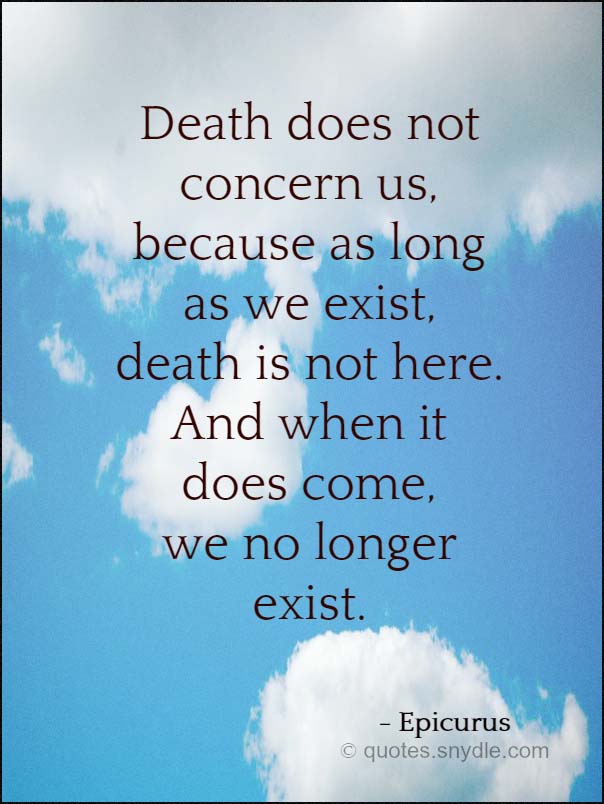 Death does not concern us, because as long as we exist, death is not here. And when it does come, we no longer exist.
– Epicurus 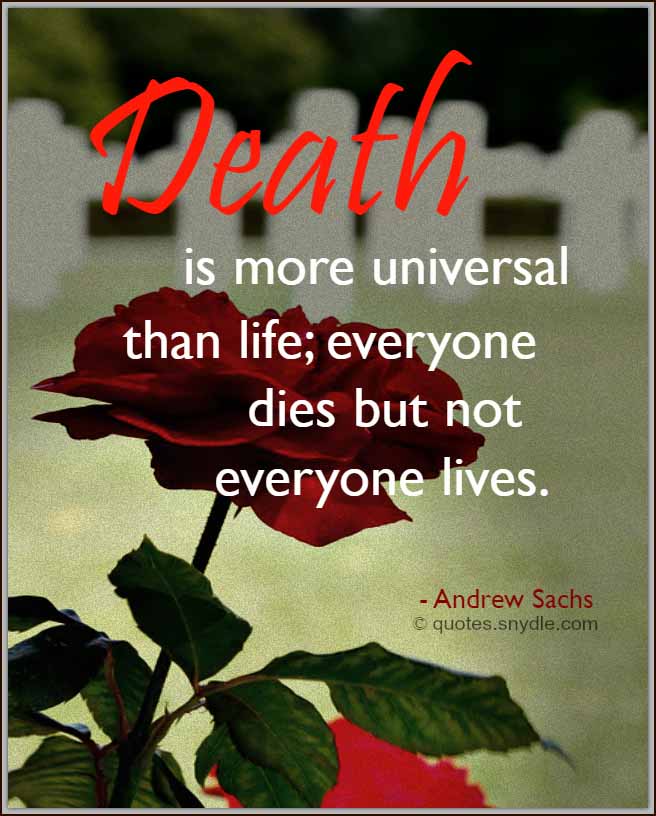 Death is more universal than life; everyone dies but not everyone lives.
– Andrew Sachs

When people don’t express themselves, they die one piece at a time.
– Laurie Halse Anderson

The good die young – because they see it’s no use living if you’ve got to be good.
– John Barrymore 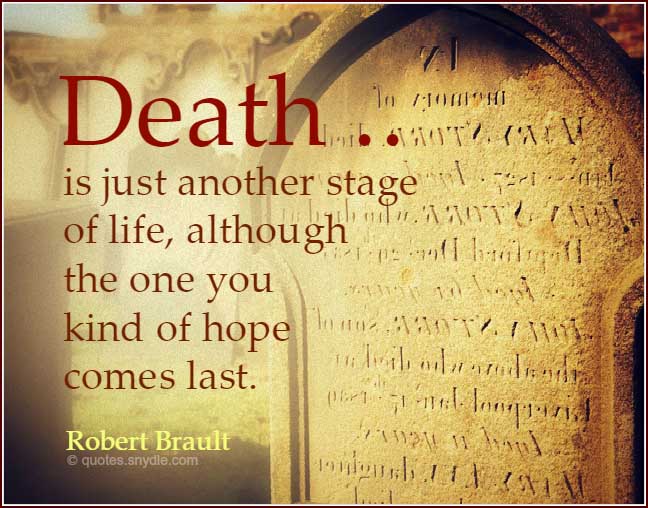 Death is just another stage of life, although the one you kind of hope comes last.
– Robert Brault

Death is not the worst that can happen to men.
– Plato

The last enemy that shall be destroyed is death.
– J.K. Rowling

Fear not death for the sooner we die, the longer we shall be immortal.
– Benjamin Franklin

I’m not afraid to die, I just don’t want to be there when it happens.
– Woody Allen

Life is better than death, I believe, if only because it is less boring, and because it has fresh peaches in it.
– Alice Walker 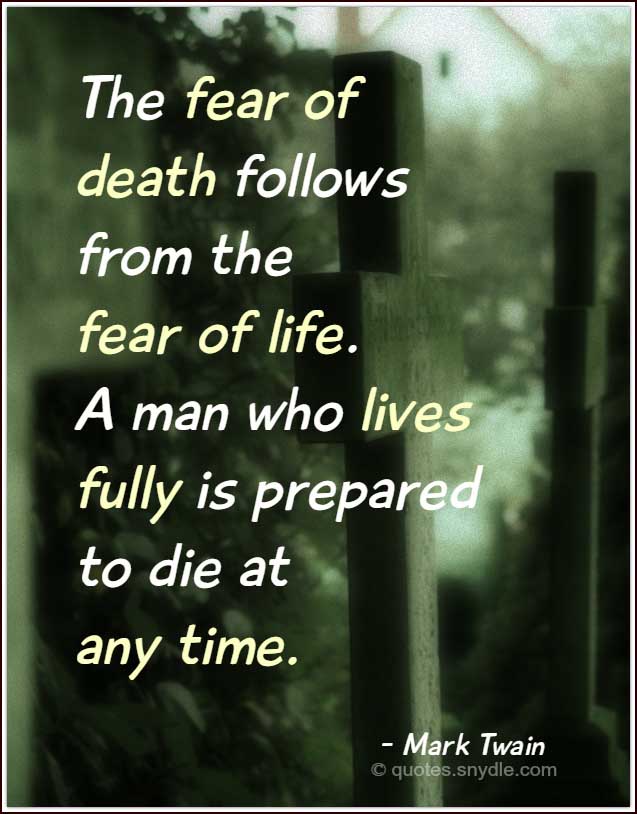 Death descended like a theatrical storm over the Drakensberg Mountains, stranding me while it ran its course.
-B.G. Bowers

All our knowledge merely helps us to die a more painful death than animals that know nothing.
– Maurice Maeterlinck

A fact of life we all die. But the positive impact you have on others will be a living legacy.
– Catherine Pulsifer 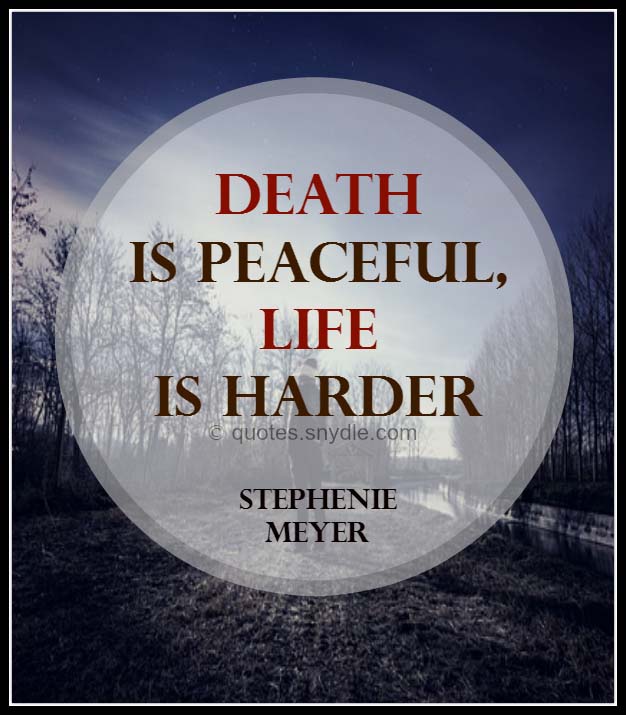