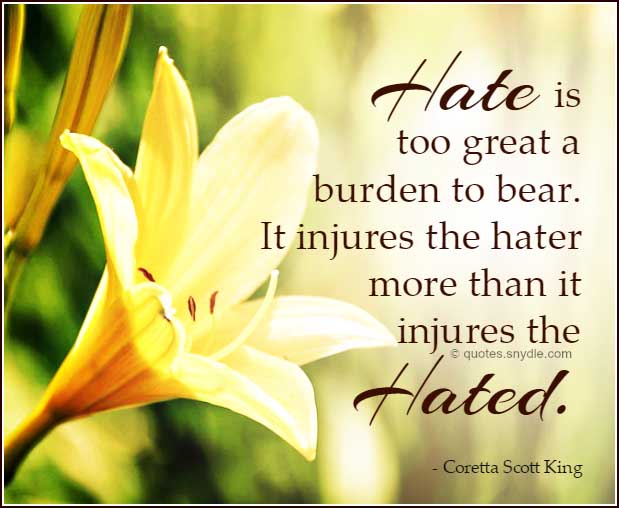 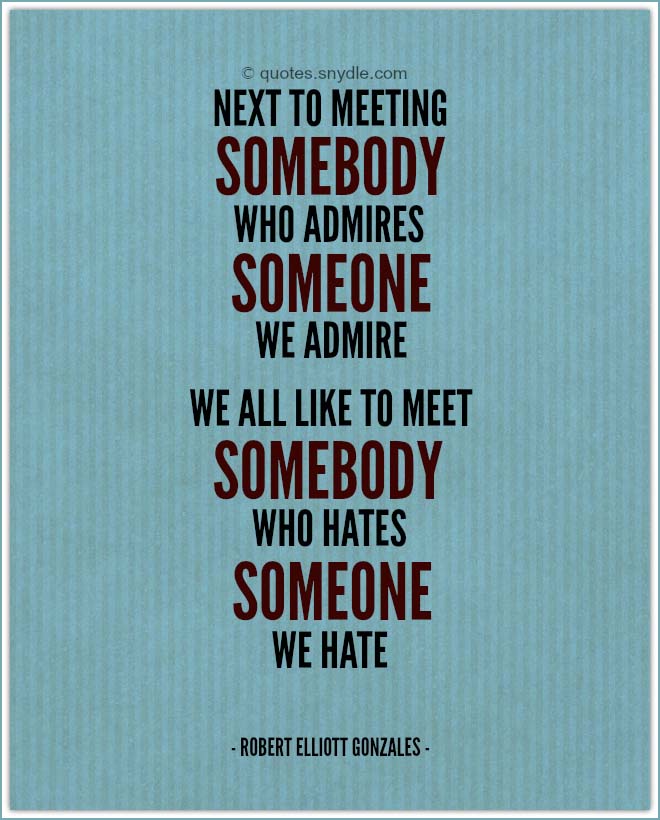 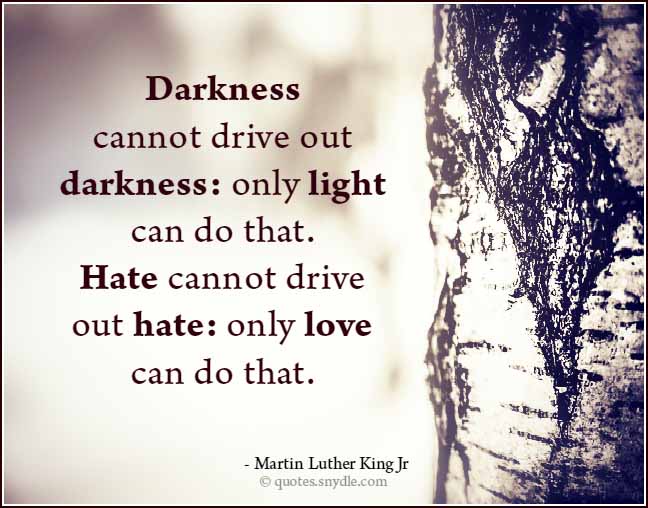 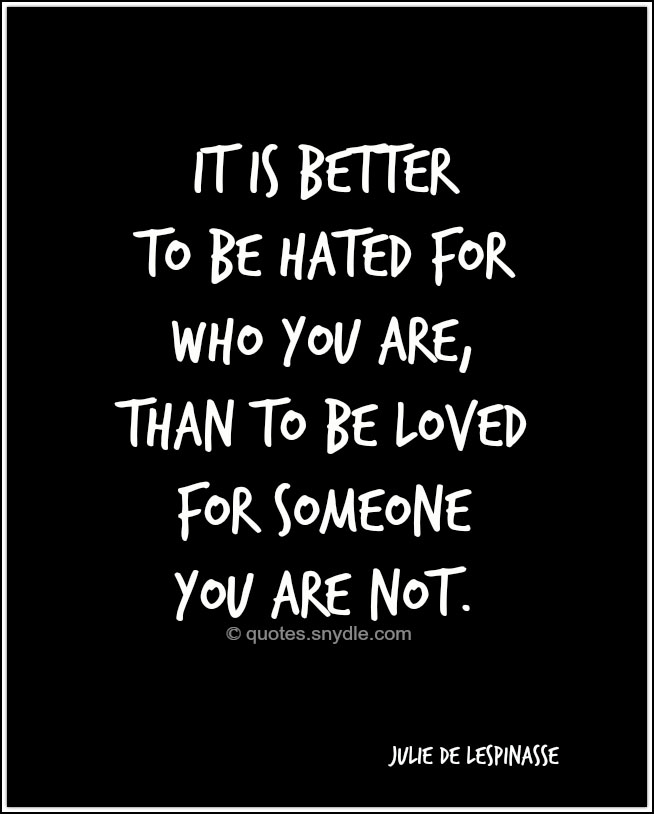 It is better to be hated for who you are, than to be loved for someone you are not.
– Julie de Lespinasse 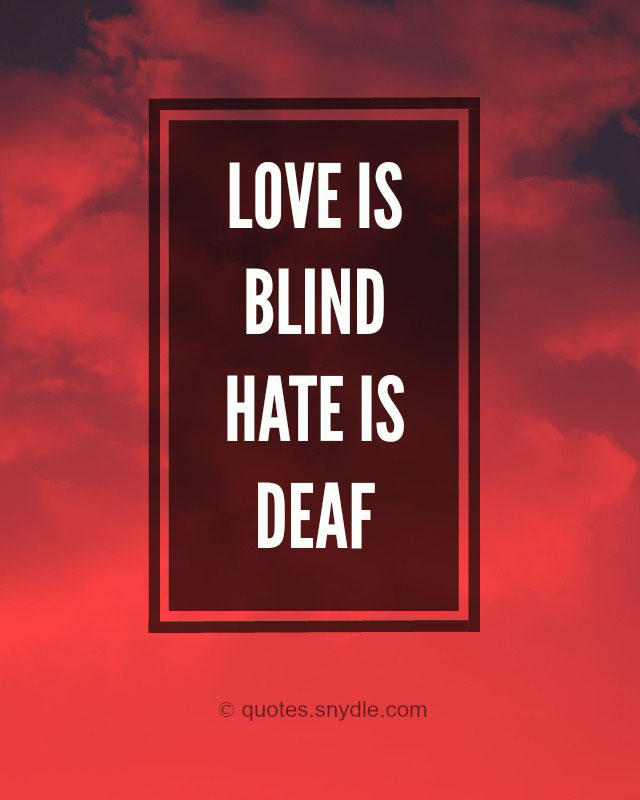 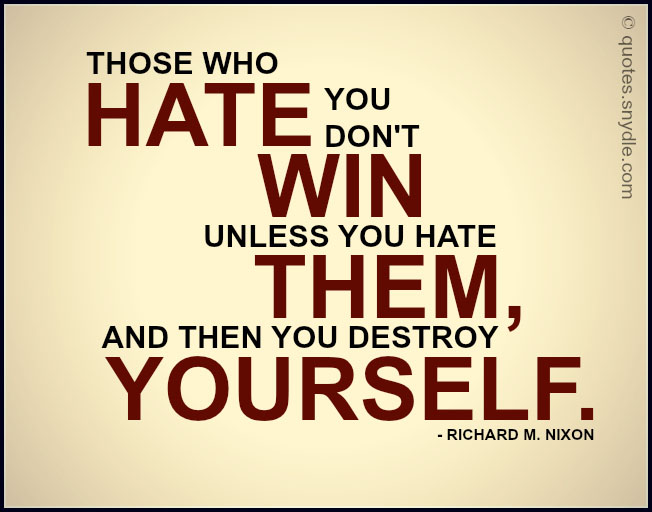 Those who hate you don’t win unless you hate them, and then you destroy yourself.
– Richard M. Nixon 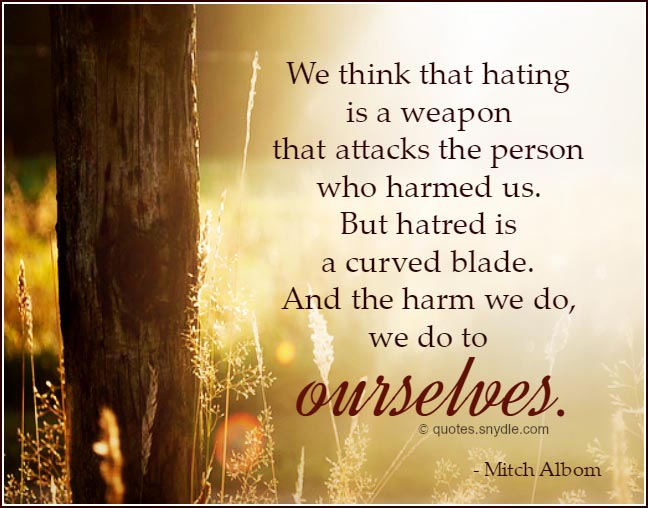 We think that hating is a weapon that attacks the person who harmed us. But hatred is a curved blade. And the harm we do, we do to ourselves.
– Mitch Albom 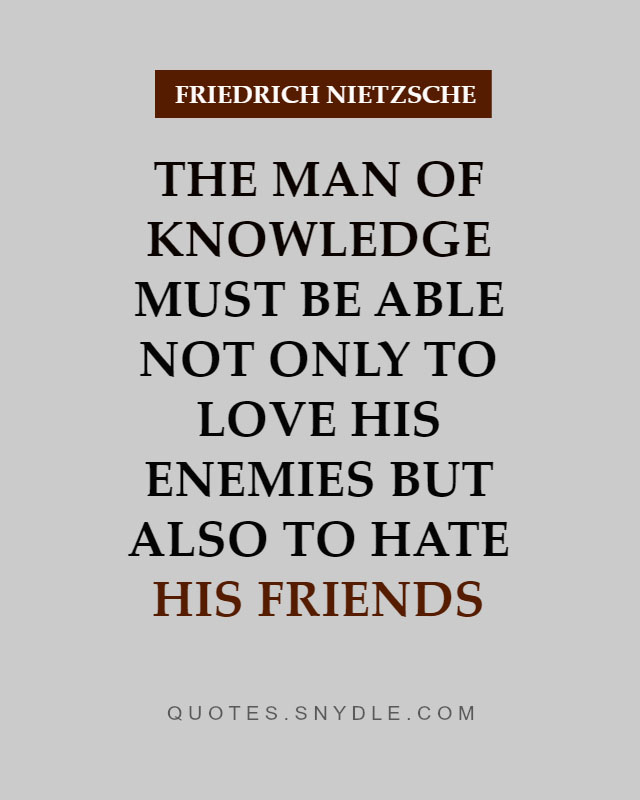 The man of knowledge must be able not only to love his enemies but also to hate his friends.
– Friedrich Nietzsche 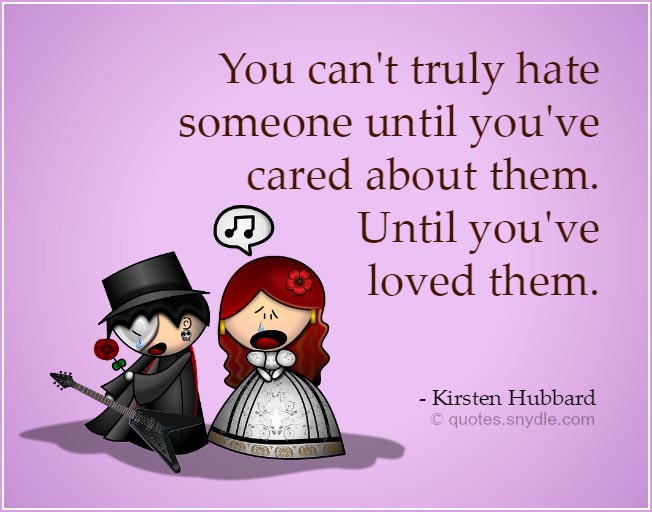 You can’t truly hate someone until you’ve cared about them. Until you’ve loved them.
– Kirsten Hubbard 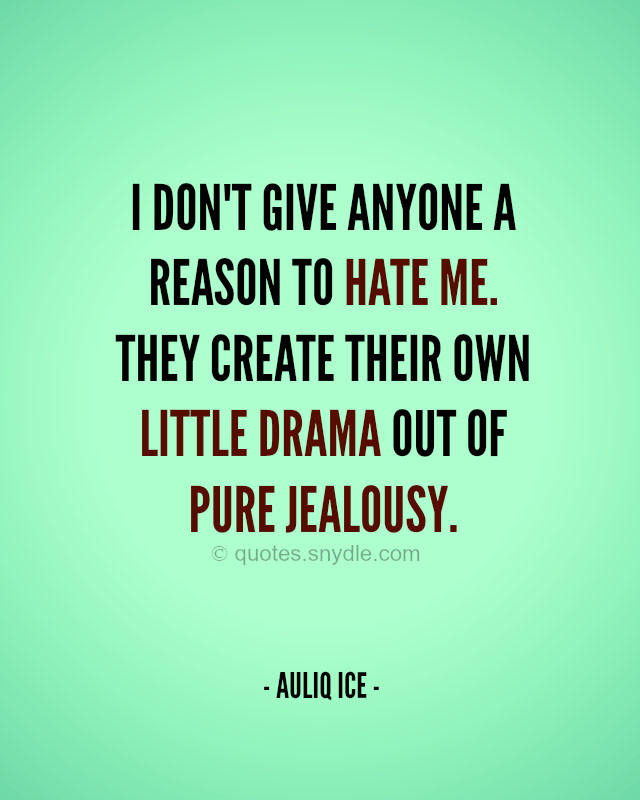 I don’t give anyone a reason to hate me. They create their own little drama out of pure jealousy.
– Auliq Ice

Peoples are made of hate and of love, and more of hate than love.
– Jose Marti

From the deepest desires often come the deadliest hate.
– Socrates

People who are filled with hate don’t know how to handle love.
– P.C. Cast

The only thing worse than a boy who hates you: a boy that loves you.
– Markus Zusak

We should not fail to hide our love for the one who fails to hide hatred.
– Munia Khan

People always have reason to hate, though they often may not find any reason for love.
– Awdhesh Singh

It is easier to hate those we love, than love those whom we have hated.
– Norman Macdonald 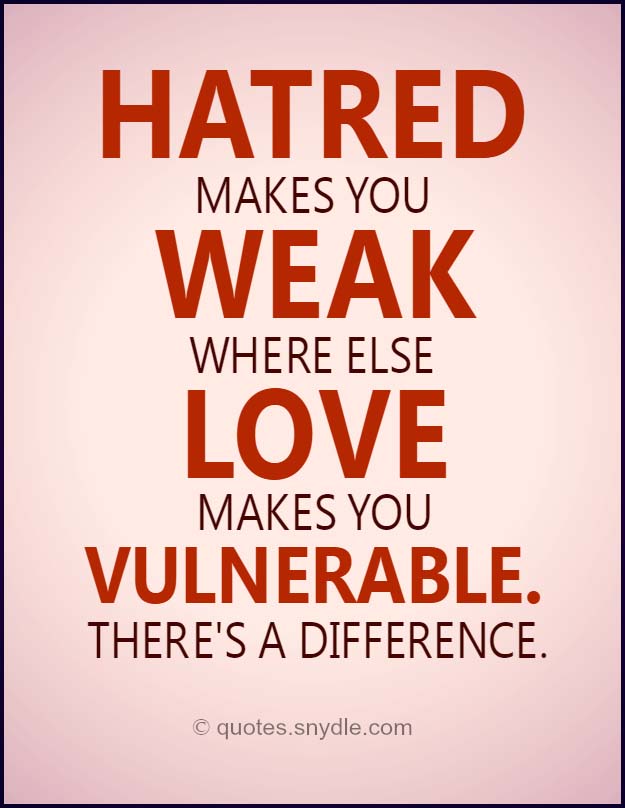 Hatred makes you weak where else love makes you vulnerable. There’s a difference.
– Unknown 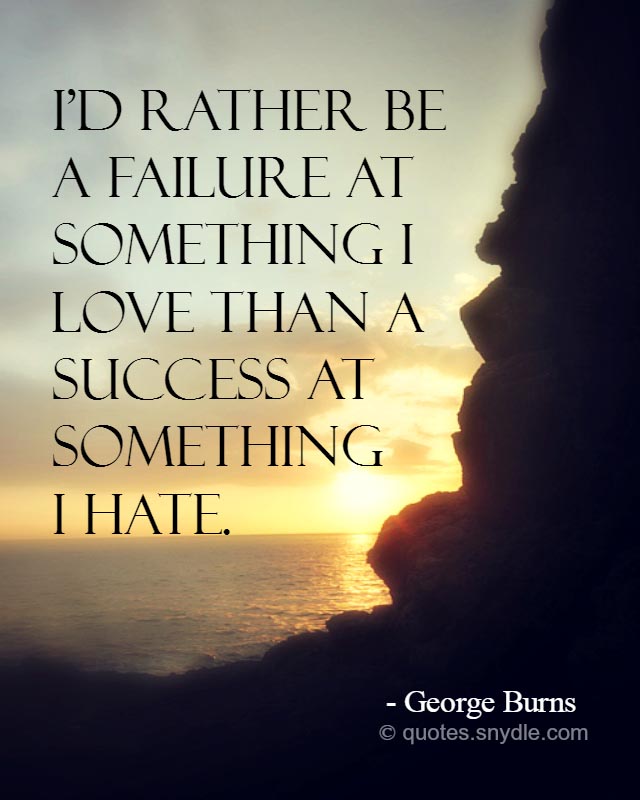 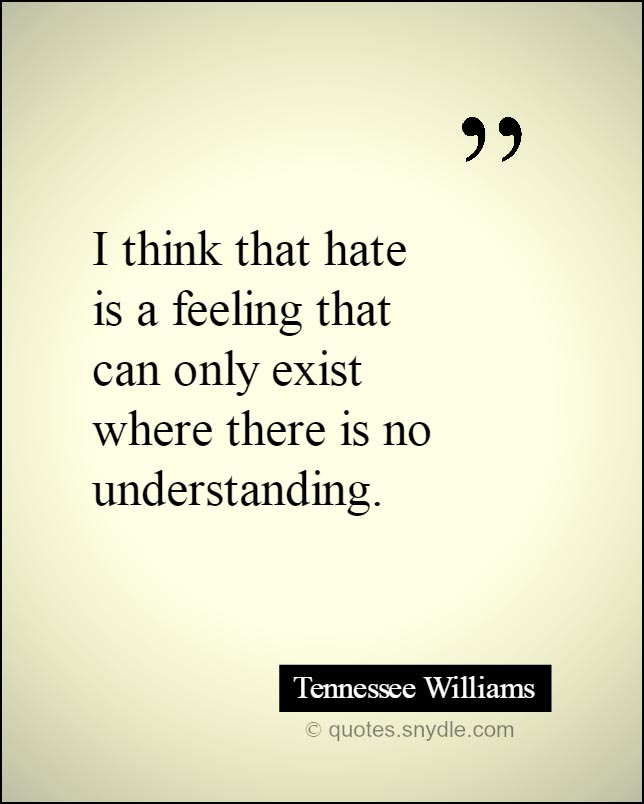 I think that hate is a feeling that can only exist where there is no understanding.
– Tennessee Williams

If you hate a person, you hate something in him that is part of yourself. What isn’t part of ourselves doesn’t disturb us.
– Hermann Hesse

Hate is the consequence of fear; we fear something before we hate; a child who fears noises becomes the man who hates them.
– Cyril Connolly

Enemies are the people who think about you more than your friends do.
– Donna Lynn Hope

The hated man is the result of his hater’s pride rather than his hater’s conscience.
– Criss Jami

Hate and mistrust are the children of blindness.
– William Watson

If there’s no hatred in your heart, then your mind won’t find fault with others.
– Toba Beta

All hatred is self-hatred, just as all healing is self-healing.
– Eric Micha’el Leventhal

Hatred is always at war with love that keeps growing.
– Toba Beta

Men don’t hate anything if there’s no hatred in their hearts.
– Toba Beta

Stronger than lover’s love is lover’s hate. Incurable, in each, the wounds they make.
– Euripides

Hate isn’t healthy, it damages the hater more than the one who’s hated!
– Eric Jerome Dickey

Hate is not a good counselor.
– Victoria Wolff

The hatred of those who are near to us is most violent.
– Tacitus Quotes 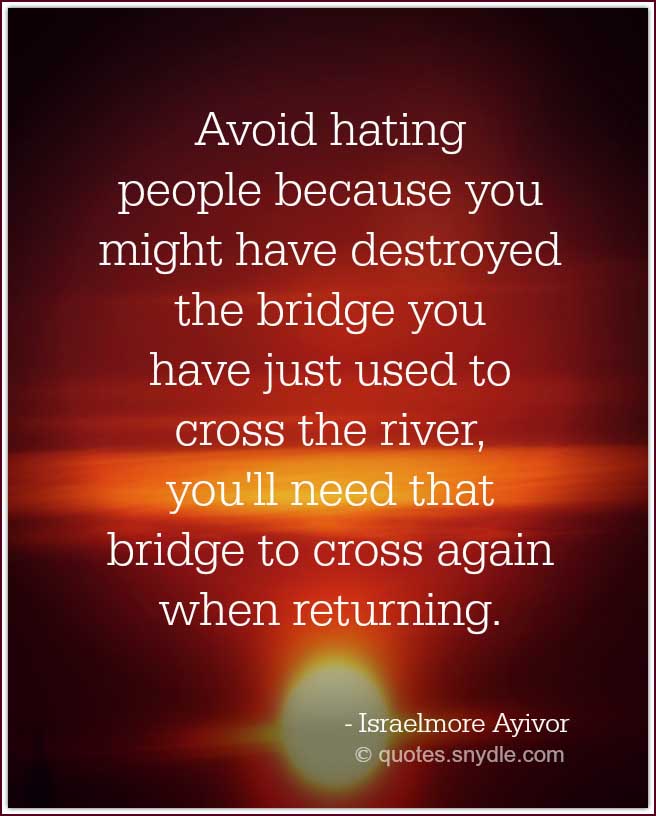 Avoid hating people because you might have destroyed the bridge you have just used to cross the river; you’ll need that bridge to cross again when returning.
– Israelmore Ayivor 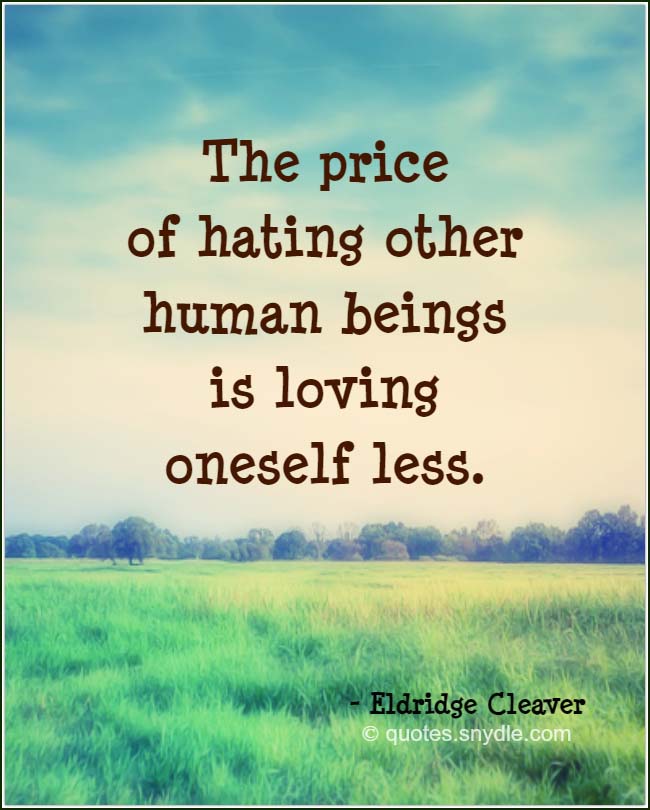 The price of hating other human beings is loving oneself less.
– Eldridge Cleaver

Love those you hate you.
– Leo Tolstoy, Anna Karenina

Love, respect, friendship, do not unite people as much as a common hatred for something.
– Anton Chekhov

Hatreds are the cinders of affection.
– Sir Walter Ralegh

We have just enough religion to make us hate, but not enough to make us love one another.
– Jonathan Swift

A man who lives, not by what he loves but what he hates, is a sick man.
– Archibald Macleish

Hate is all a lie, there is no truth in hate.
– Kathleen Norris

Hating people is like burning down your own house to get rid of a rat.
– Henry Emerson Fosdick

Hate cages all the good things about you.
– Terri Guillemets

Hate is a lack of imagination.
– Graham Greene

Hatred is a form of faith, distilled by passion to remove all rationality.
– L.E. Modesitt Jr.

When you look through the window of hate, you are really looking in the Devil’s mirror.
– Jack Byrne

Your smile can heal thousands; but your anger can kill millions. Your “hand-shake” can encourage tens of people while your “finger-pointing” can turn ten thousands away from you!
– Israelmore Ayivor

It is strange how you shall hate a man, and yet pity him from the depths.
– Richard Llewellyn

I hate victims who respect their executioners.
– Jean-Paul Sartre