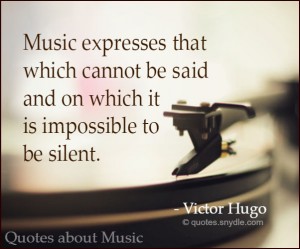 Music is and will always be with us. I can’t imagine a life without music. It is something I am used to. I enjoy music and it has been incorporated in my everyday life. Music is considered as God’s gift to us. It plays vital role in expressing feelings and emotions of musicians and those who write music. Here are some of the famous and well-known quotes about music. We also include some of the best and beautiful quotes and sayings about music with images. Enjoy! 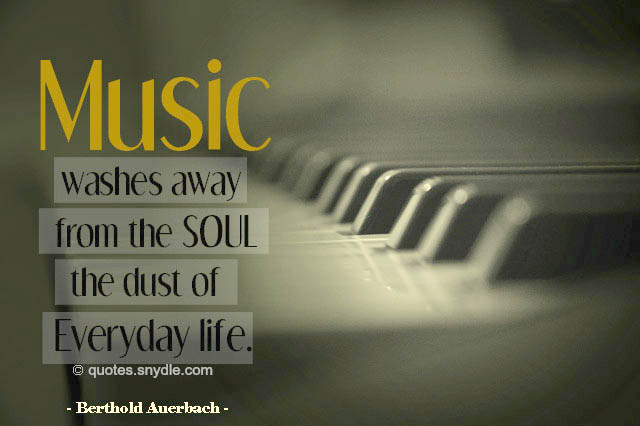 Music washes away from the soul the dust of everyday life.
― Berthold Auerbach 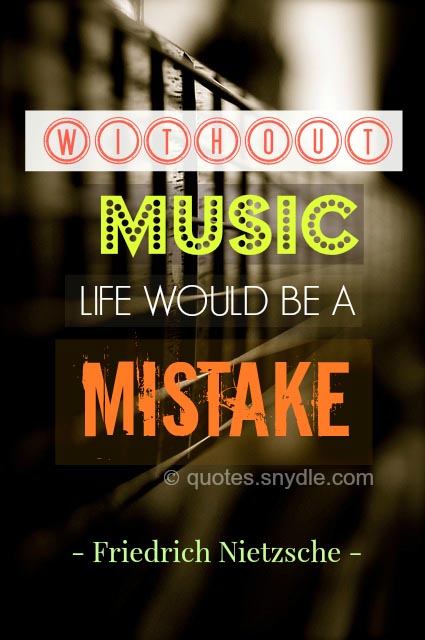 Without music life would be a mistake.
― Friedrich Nietzsche 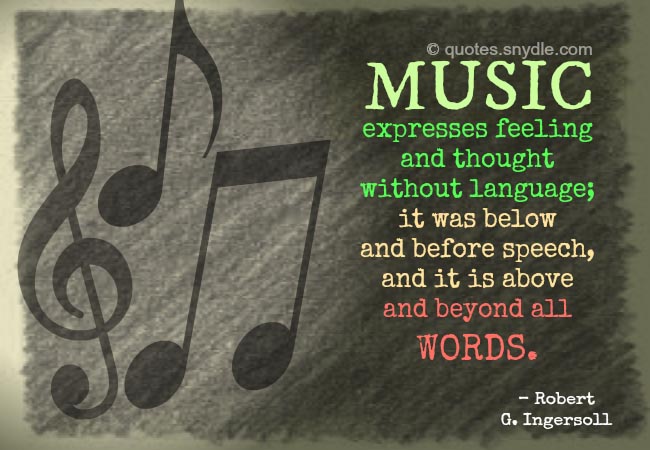 Music expresses feeling and thought, without language; it was below and before speech, and it is above and beyond all words.
― Robert G. Ingersoll

Take a music bath once or twice a week for a few seasons. You will find it is to the soul what a water bath is to the body.

Music doesn’t lie. If there is something to be changed in this world, then it can only happen through music.
― Jimi Hendrix

He who sings scares away his woes.
― Cervantes 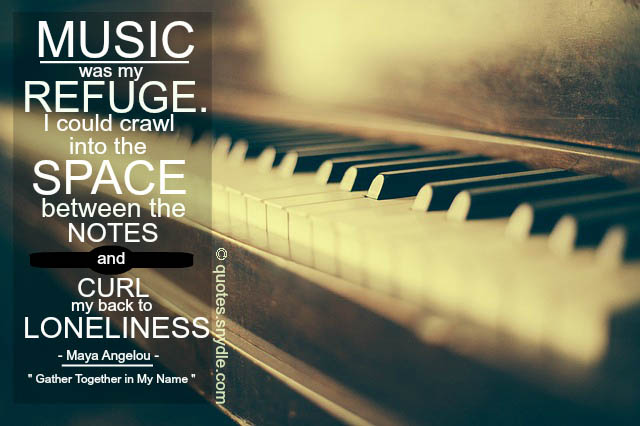 Music was my refuge. I could crawl into the space between the notes and curl my back to loneliness.
― Maya Angelou, Gather Together in My Name 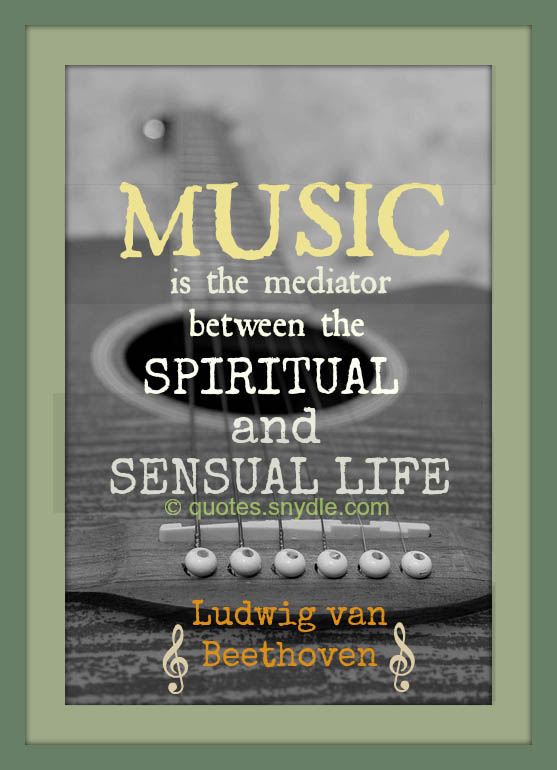 Music is the mediator between the spiritual and the sensual life.
― Ludwig van Beethoven 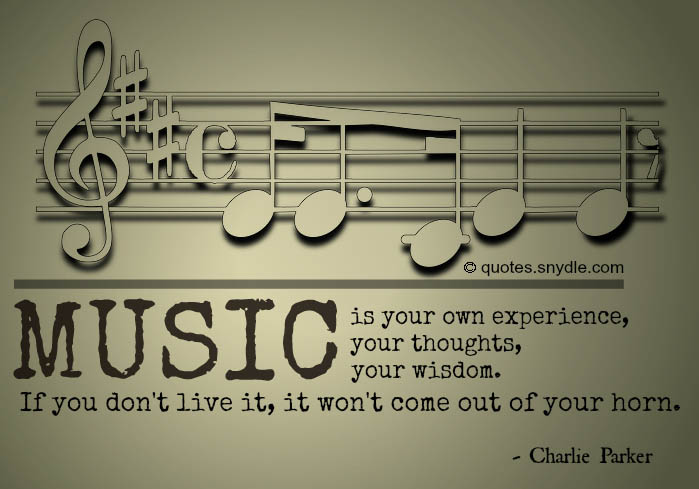 Music is your own experience, your thoughts, your wisdom. If you don’t live it, it won’t come out of your horn.
― Charlie Parker

Music cleanses the understanding; inspires it, and lifts it into a realm which it would not reach if it were left to itself.
― Henry Ward Beecher

One good thing about music, when it hits you, you feel no pain.
― Bob Marley

Play the music, not the instrument.
― Author Unknown

Music is the cup which holds the wine of silence.
― Robert Fripp

Music melts all the separate parts of our bodies together.
― Anaïs Nin

Quotes about Music and Life

Life is like music; it must be composed by ear, feeling, and instinct, not by rule.
― Samuel Butler

If I were to begin life again, I would devote it to music. It is the only cheap and unpunished rapture upon earth.
― Sydney Smith

There is nothing in the world so much like prayer as music is.
― William P. Merrill

My idea is that there is music in the air, music all around us; the world is full of it, and you simply take as much as you require.
― Edward Elgar

Truly to sing, that is a different breath.
― Rainer Maria Rilke

Music is the shorthand of emotion.
― Leo Tolstoy

There is no truer truth obtainable by Man than comes of music.
― Robert Browning

Music is the poetry of the air.
― Richter

Music’s the medicine of the mind.
― John A. Logan

He who hears music, feels his solitude peopled at once.
― Robert Browning

Music is an outburst of the soul.
― Frederick Delius 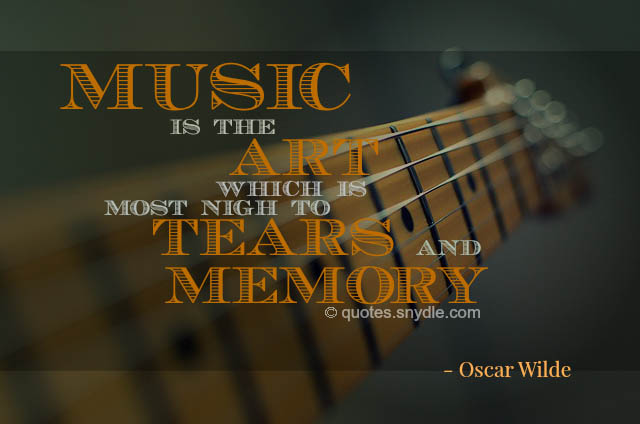 Music is the art which is most nigh to tears and memory.
― Oscar Wilde

In music the passions enjoy themselves.
― Nietzsche, Beyond Good and Evil, 1886 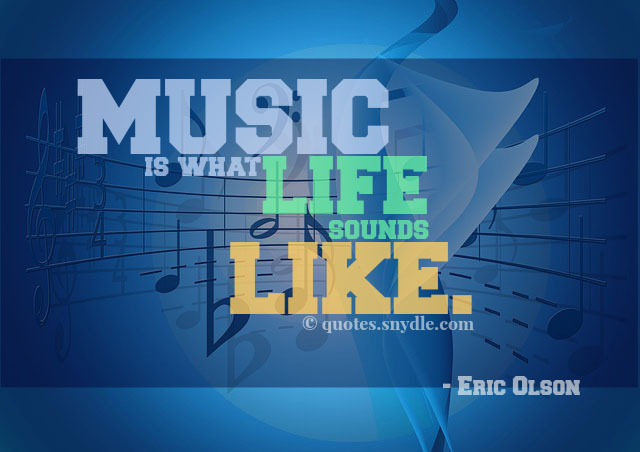 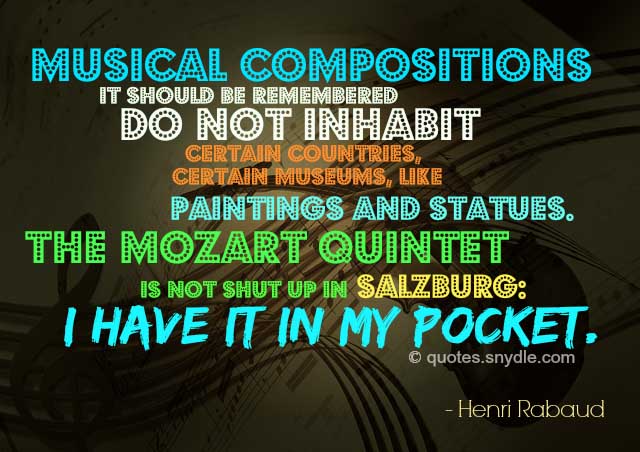 Musical compositions, it should be remembered, do not inhabit certain countries, certain museums, like paintings and statues. The Mozart Quintet is not shut up in Salzburg: I have it in my pocket.
― Henri Rabaud 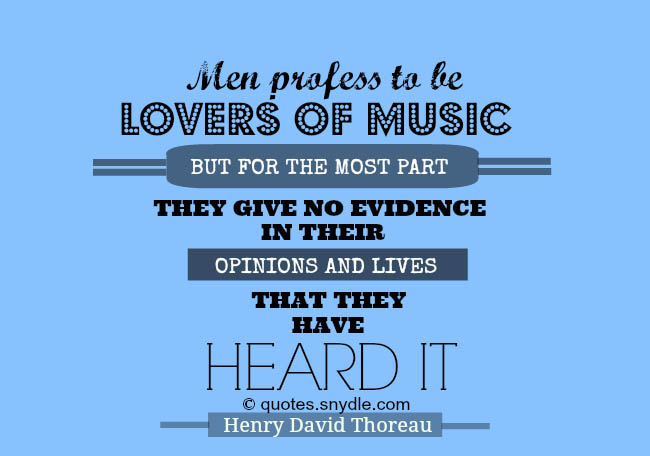 Men profess to be lovers of music, but for the most part they give no evidence in their opinions and lives that they have heard it.
― Henry David Thoreau

Music is the literature of the heart; it commences where speech ends.
― Alphonse de Lamartine

Music is forever; music should grow and mature with you, following you right on up until you die.
― Paul Simon 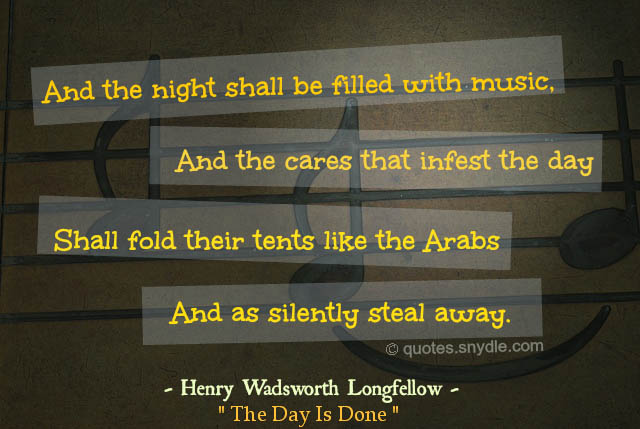 And the night shall be filled with music,
And the cares that infest the day
Shall fold their tents like the Arabs
And as silently steal away.
― Henry Wadsworth Longfellow, The Day Is Done

If a composer could say what he had to say in words he would not bother trying to say it in music.
― Gustav Mahler 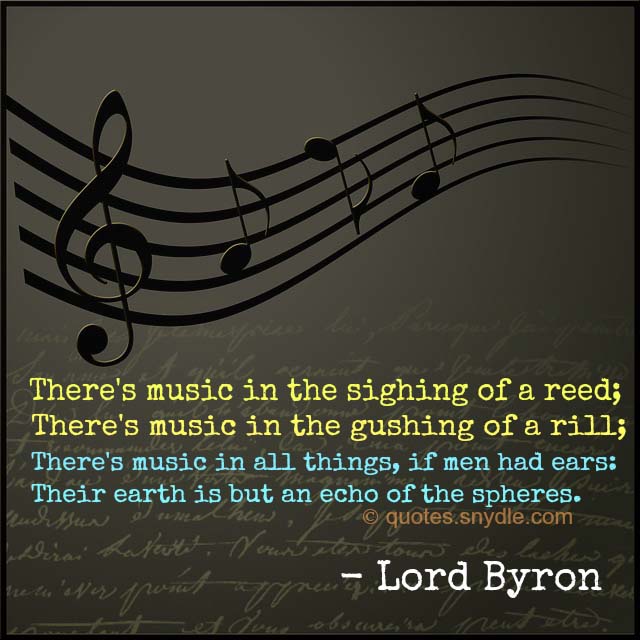 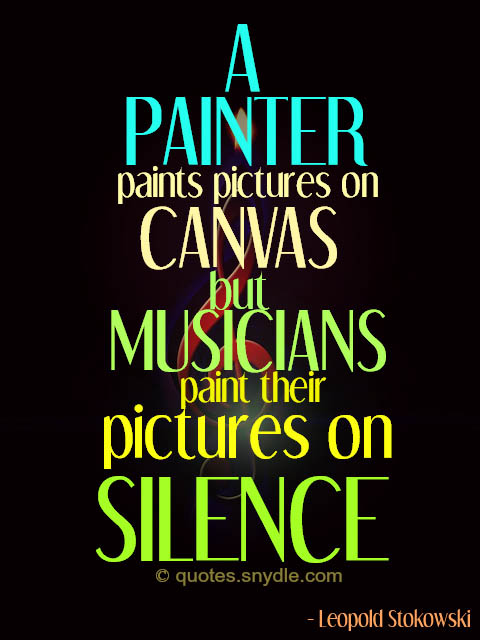 A painter paints pictures on canvas. But musicians paint their pictures on silence.
― Leopold Stokowski 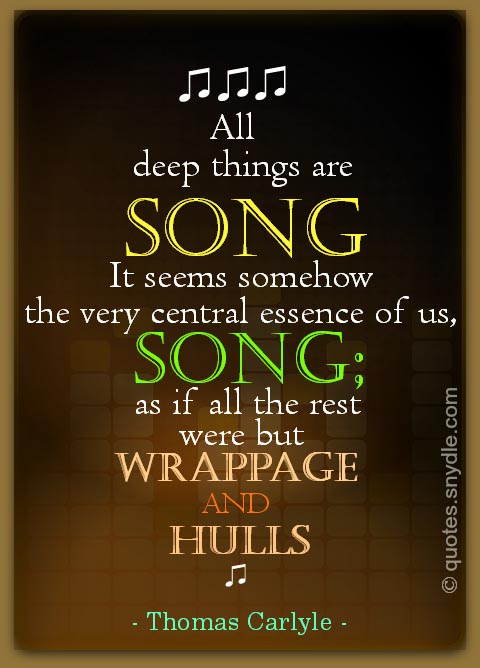 All deep things are song. It seems somehow the very central essence of us, song; as if all the rest were but wrappages and hulls!
― Thomas Carlyle

Why waste money on psychotherapy when you can listen to the B Minor Mass?
― Michael Torke

If in the afterlife there is not music, we will have to import it.
― Doménico Cieri Estrada

Alas for those that never sing,
But die with all their music in them!
― Oliver Wendell Holmes

Life can’t be all bad when for ten dollars you can buy all the Beethoven sonatas and listen to them for ten years.
― William F. Buckley, Jr.

Music is the wine which inspires one to new generative processes, and I am Bacchus who presses out this glorious wine for mankind and makes them spiritually drunken.
― Ludwig van Beethoven

Most people use music as a couch; they want to be pillowed on it, relaxed and consoled for the stress of daily living. But serious music was never meant to be soporific.
― Aaron Copland