Here are some of the famous depression quotes and sayings with pictures that we collected and compiled for you. There are times when you feel so down. You feel so depressed that you do not see the point of waking up in the morning—what are mornings for anyway, but to start a new horrible day in your life? You just want to lay there in your bed and wallow in misery and self-pity. You start to hate everything and everybody. Then, you start to hate yourself. You hate yourself for being so stupid and pitiful all the time.

Stop it right now! Stop hating yourself and everything around you! Nothing is ever going to happen if you do nothing about it! Don’t let your problems get you down. Be strong and stand firm. You can get through this. Browse and realize that it’s time to move forward through these quotes about depression.

Quotes about Depression and Anxiety 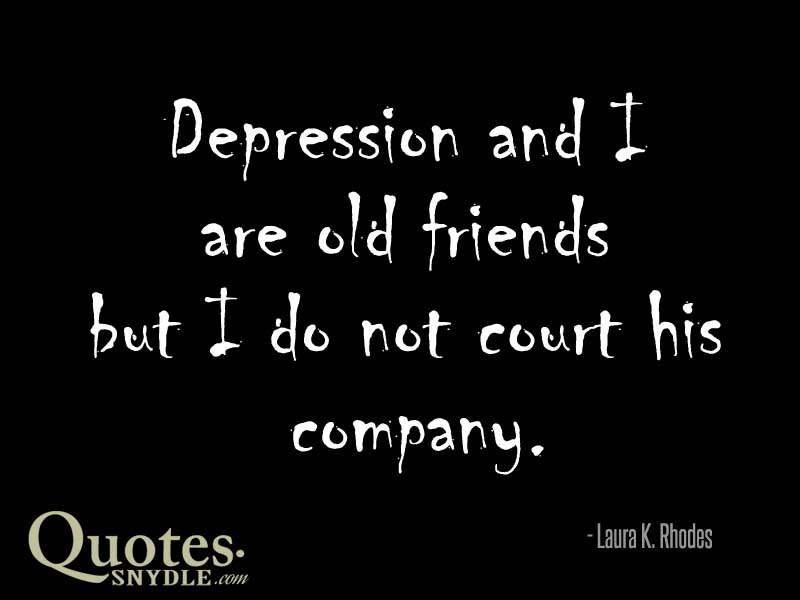 Depression and I are old friends but I do not court his company.
― Laura K. Rhodes 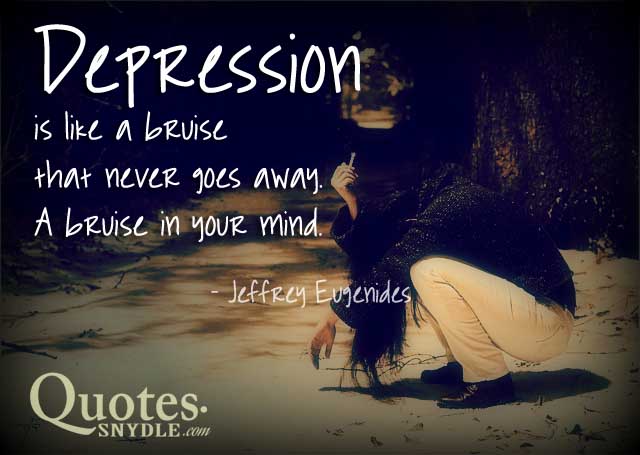 Depression is like a bruise that never goes away. A bruise in your mind.
― Jeffrey Eugenides 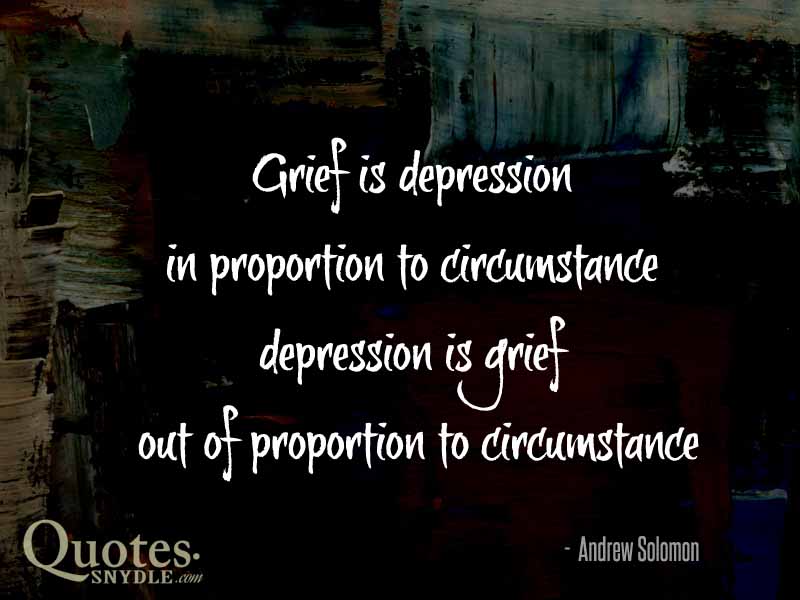 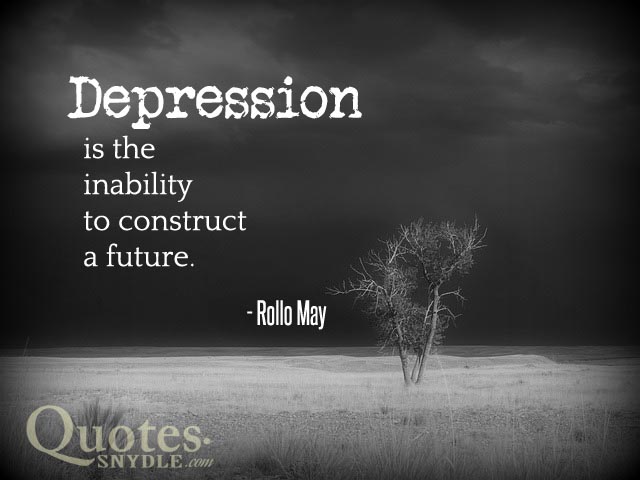 Depression is the inability to construct a future.
― Rollo May 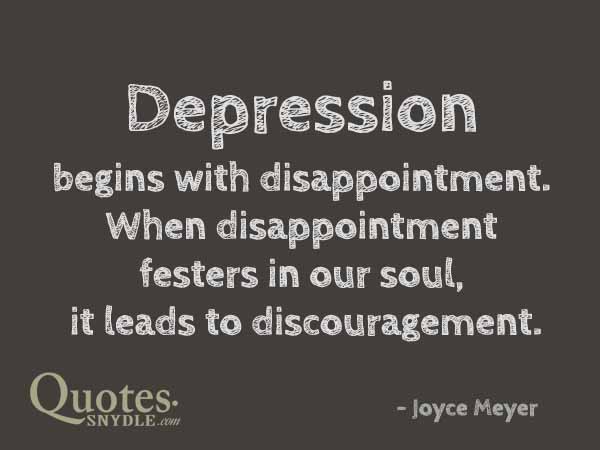 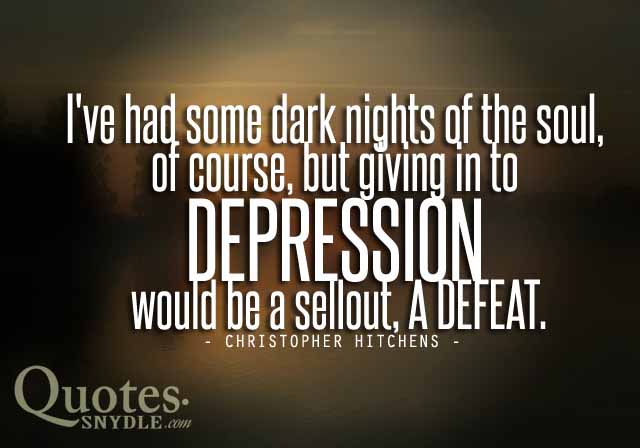 I’ve had some dark nights of the soul, of course, but giving in to depression would be a sellout, a defeat.
― Christopher Hitchens

In addition to my other numerous acquaintances, I have one more intimate confidant… My depression is the most faithful mistress I have known — no wonder, then, that I return the love.
― Søren Kierkegaard, Either/Or: A Fragment of Life 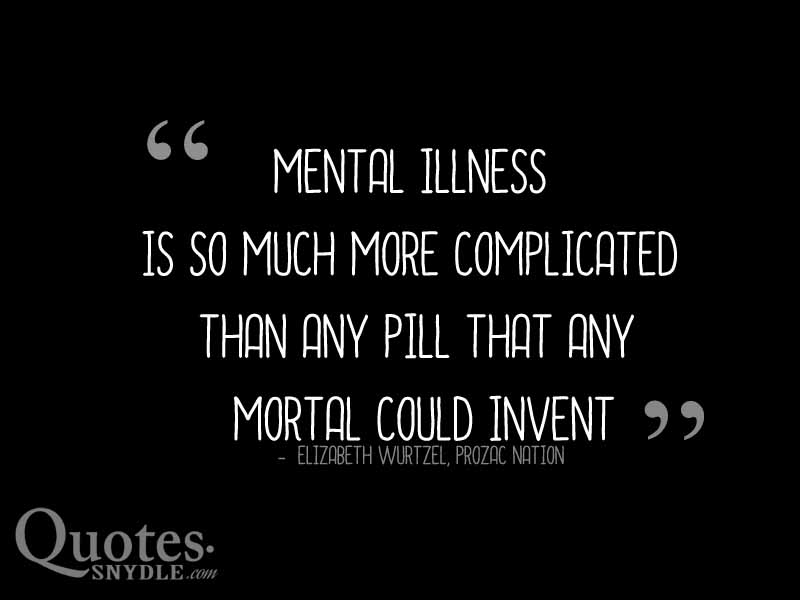 Mental illness is so much more complicated than any pill that any mortal could invent
― Elizabeth Wurtzel, Prozac Nation 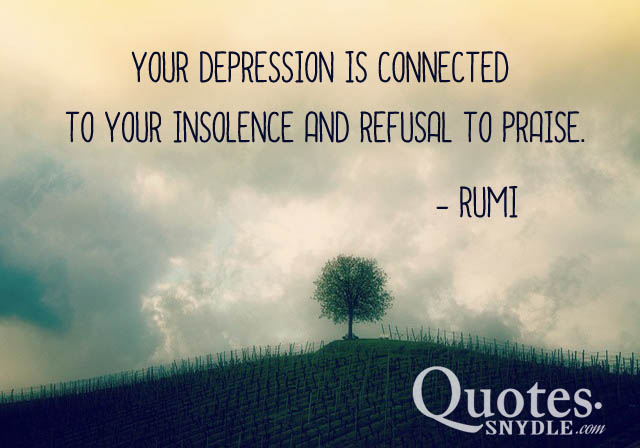 Your depression is connected to your insolence and refusal to praise.
― Rumi 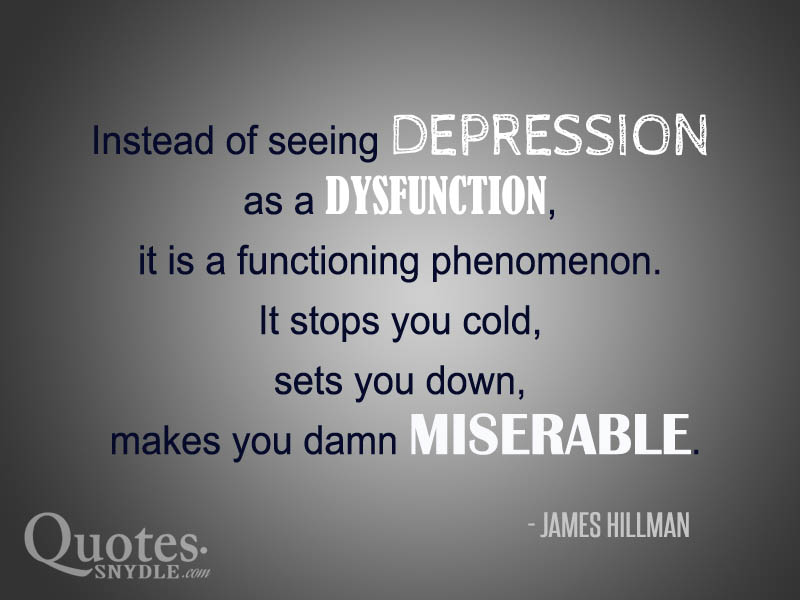 Instead of seeing depression as a dysfunction, it is a functioning phenomenon. It stops you cold, sets you down, makes you damn miserable.
― James Hillman 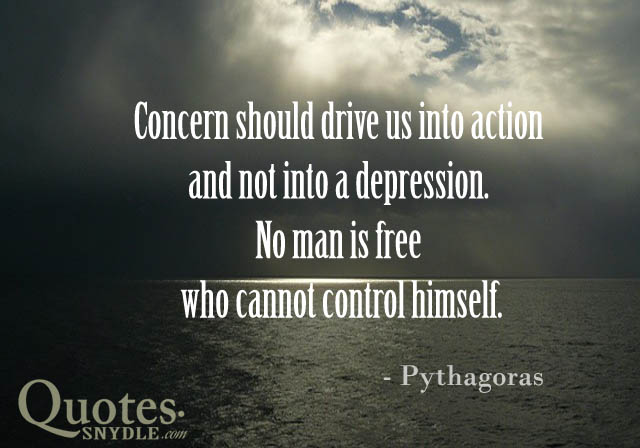 Concern should drive us into action and not into a depression. No man is free who cannot control himself.
― Pythagoras 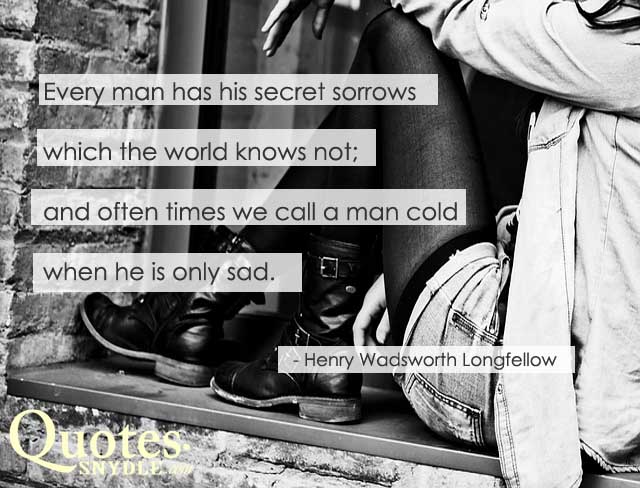 Every man has his secret sorrows which the world knows not; and often times we call a man cold when he is only sad.
― Henry Wadsworth Longfellow 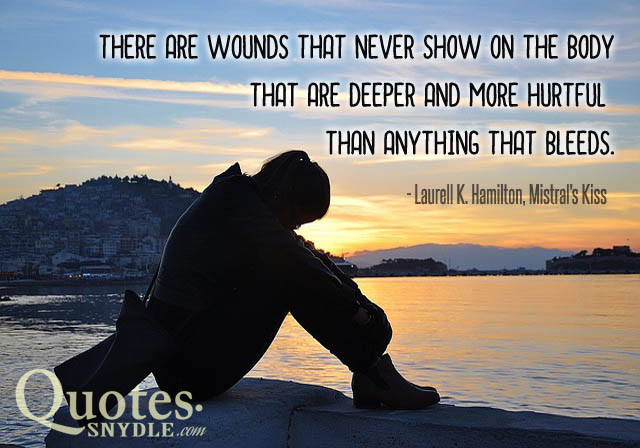 There are wounds that never show on the body that are deeper and more hurtful than anything that bleeds.
― Laurell K. Hamilton, Mistral’s Kiss 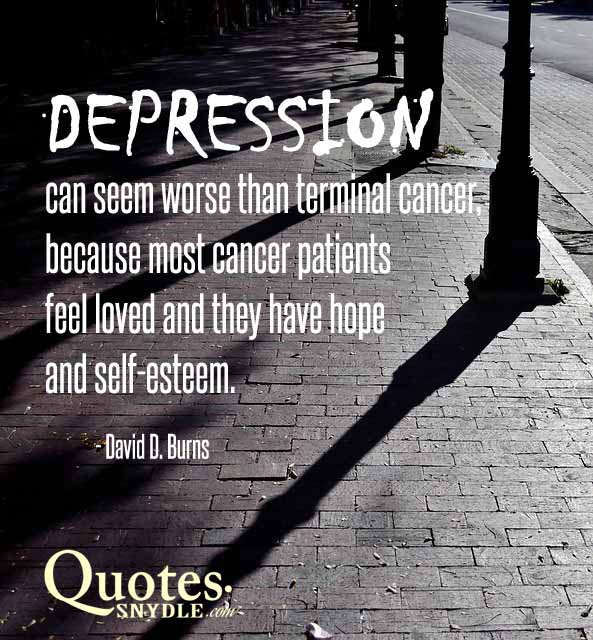 Depression can seem worse than terminal cancer, because most cancer patients feel loved and they have hope and self-esteem.
― David D. Burns

Depression can make you sad and feel lonely. It’s really hard and very overwhelming. You will feel that you’re alone and nobody is there for you. Here are some of the sad quotes about depression that will truly break your heart.

Sticks and stones may break my bones but words will only cause permanent psychological damage.
― Unknown

Sometimes the girl who’s always been there for everyone else needs someone to be there for her.
― Unknown

You’re scared to tell people how much it hurts, so you keep it all to yourself.
― Unknown

The same girl who smiles and talks non-stop, is the same one who cries herself to sleep at night.
― Unknown

She hurts and she cries. But you can’t see the depression in her eyes. Because she just smiles..
― Unknown

I wish it would rain all day, maybe that would make the pain go away.
― Laura Tommons

When you’re surrounded by all these people, it can be even lonelier than when you’re by yourself. You can be in a huge crowd, but if you don’t feel like you can trust anybody or talk to anybody, you feel like you’re really alone.
― Fiona Apple

I feel like a defective model, like I came off the assembly line flat-out fucked and my parents should have taken me back for repairs before the warranty ran out.
― Elizabeth Wurtzel, Prozac Nation

There is no point treating a depressed person as though she were just feeling sad, saying, ‘There now, hang on, you’ll get over it.’ Sadness is more or less like a head cold- with patience, it passes. Depression is like cancer.
― Barbara Kingsolver, The Bean Trees

I’ll never forget how the depression and loneliness felt good and bad at the same time. Still does.
― Henry Rollins, The Portable Henry Rollins

When I cry about one thing, I end up crying about everything that’s messed up in my life.
― Unknown

All alone! Whether you like it or not, alone is something you’ll be quite a lot.
― Dr. Seuss

This is what I am. I have periods of enormous self-destructive depression, where I go completely off my trolley and lose all sight of reality and reason.
― Siobhan Fahey

I’ve had a tremendous problem with depression in my life. I’d rather not talk about it, because it’s over. But depression is real.
― Henri Nouwen

It was a lack of system that made the ’30s Depression as inevitable as all others previously suffered.
― Carroll O’Connor

It’s often difficult for those who are lucky enough to have never experienced what true depression is to imagine a life of complete hopelessness, emptiness and fear.
― Susan Polis Schutz

I believe that everyone experiences depression to some degree at some time in their lives. And there are probably millions of people who live with a low level of sadness and heaviness day in and day out.
― Joyce Meyer

Depression is the most unpleasant thing I have ever experienced. . . . It is that absence of being able to envisage that you will ever be cheerful again. The absence of hope. That very deadened feeling, which is so very different from feeling sad. Sad hurts but it’s a healthy feeling. It is a necessary thing to feel. Depression is very different.
― J.K. Rowling

Our Generation has had no Great war, no Great Depression. Our war is spiritual. Our depression is our lives.
― Chuck Palahniuk

I start to think there really is no cure for depression, that happiness is an ongoing battle, and I wonder if it isn’t one I’ll have to fight for as long as I live. I wonder if it’s worth it.
― Elizabeth Wurtzel

Often, we ignore the fact that our spiritual condition and psychological state of mind are highly affected by what is happening to us physically. Sometimes depression is simply the result of exhaustion.
― Tony Campolo

Mental pain is less dramatic than physical pain, but it is more common and also more hard to bear. The frequent attempt to conceal mental pain increases the burden: it is easier to say “My tooth is aching” than to say “My heart is broken.”
― C.S. Lewis, The Problem of Pain

About valachi 33 Articles
Hello, I'm Valachi, 22 years old, a freelance blogger who loves to write about anything under the sun. I've been blogging for more than 5 years now. I am currently a contributor to snydle.com, writing articles and creating graphic designs.