What will I be 20 years from now? Where will I be by then? Who will I spend the rest of my life with? These are some of the questions we ponder from day to day, trying to decipher what the future holds for us, or rather our destiny. Many a great minds have interpreted the essence of destiny, adapted to various ways of life. There are some who says it is a condition or a state of existence resulting from previous actions, therefore, like a captain steers his ship, destiny can be controlled. On the contrary, there are others who claimed that there is a higher power or ultimate design for everything, and that destiny isn’t a matter neither of choice nor subject to controlling or manipulation.
Listed below are some of the various quotes about destiny. 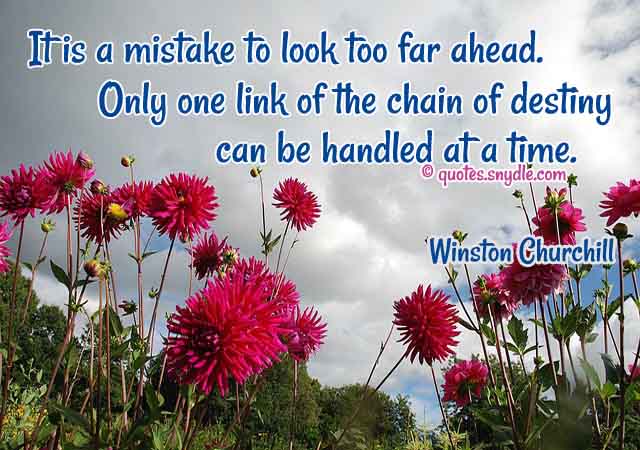 It is a mistake to look too far ahead. Only one link of the chain of destiny can be handled at a time.
— Winston Churchill 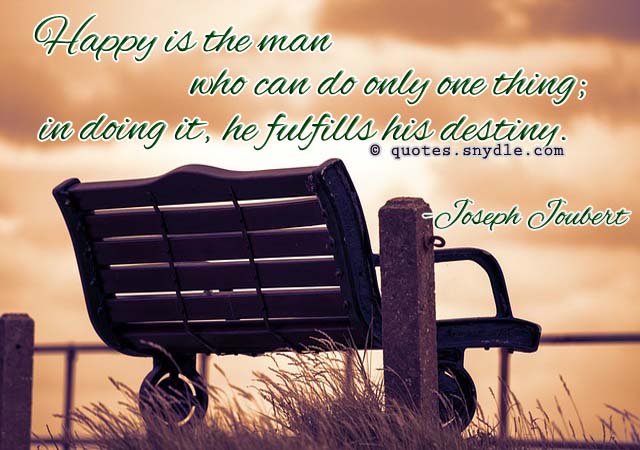 Happy is the man who can do only one thing; in doing it, he fulfills his destiny.
— Joseph Joubert 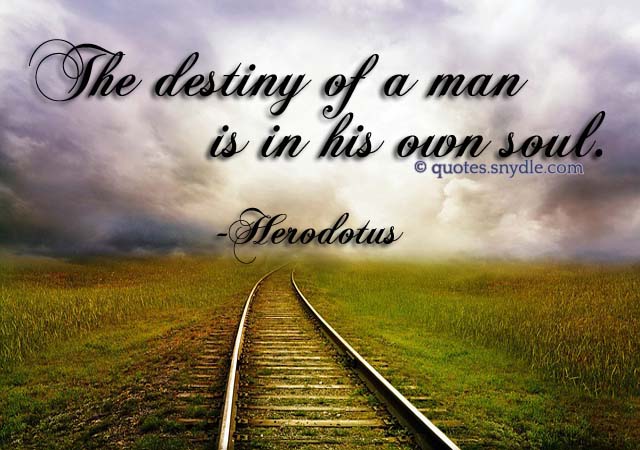 The destiny of man is in his own soul.
— Herodotus 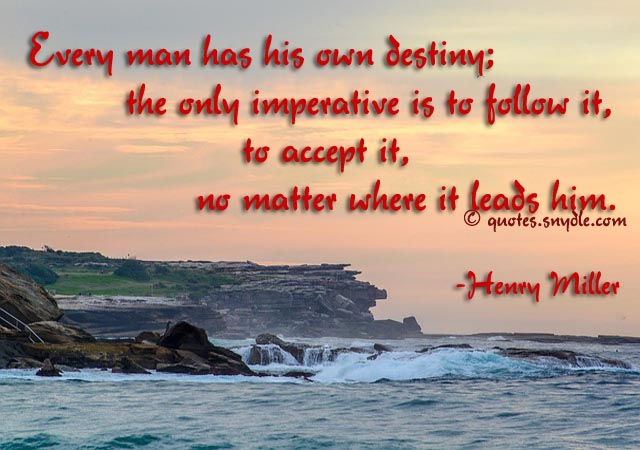 Every man has his own destiny; the only imperative is to follow it, to accept it, no matter where it leads him.
–Henry Miller 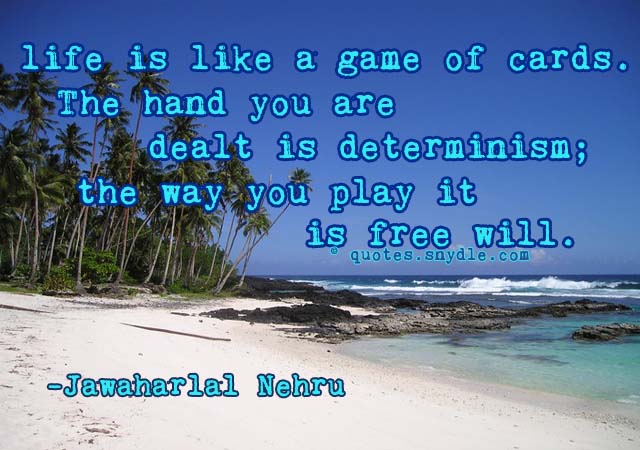 Life is like a game of cards. The hand you are dealt is determinism; the way you play it is free will.
— Jawaharlal Nehru 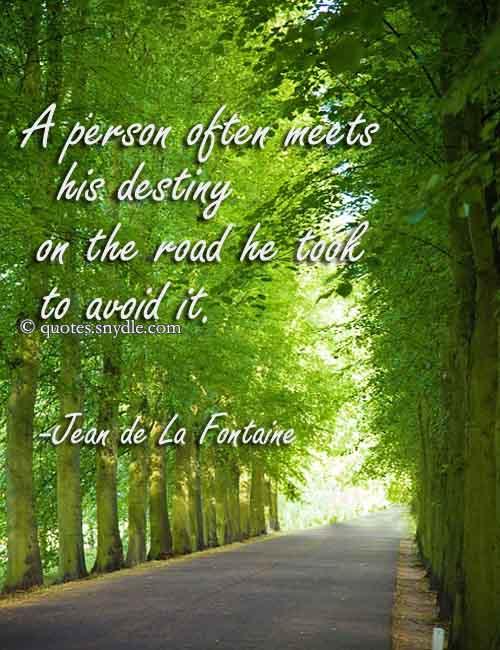 A person often meets his destiny on the road he took to avoid it.
— Jean de La Fontaine 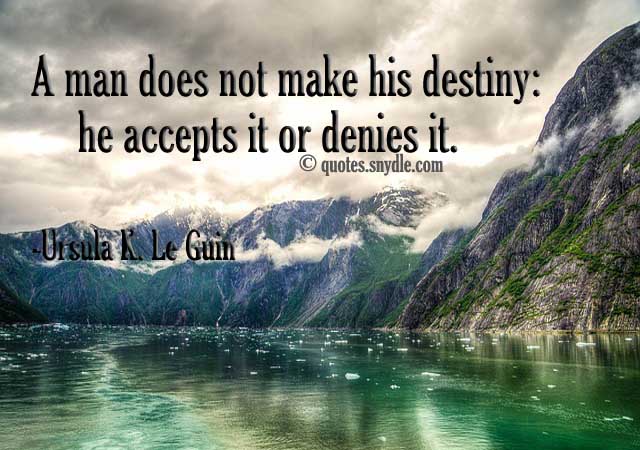 A man does not make his destiny: he accepts it or denies it.
— Ursula K. Le Guin 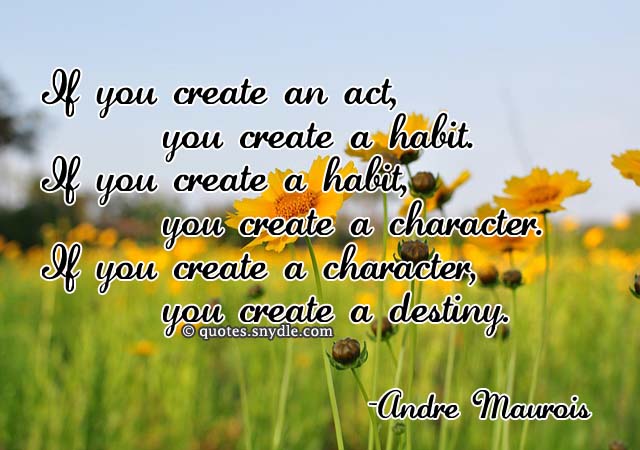 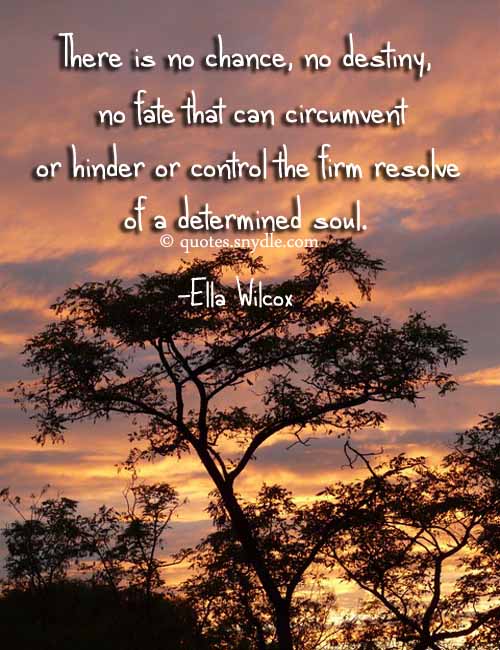 There is no chance, no destiny, no fate that can circumvent or hinder or control the firm resolve of a determined soul.
— Ella Wilcox 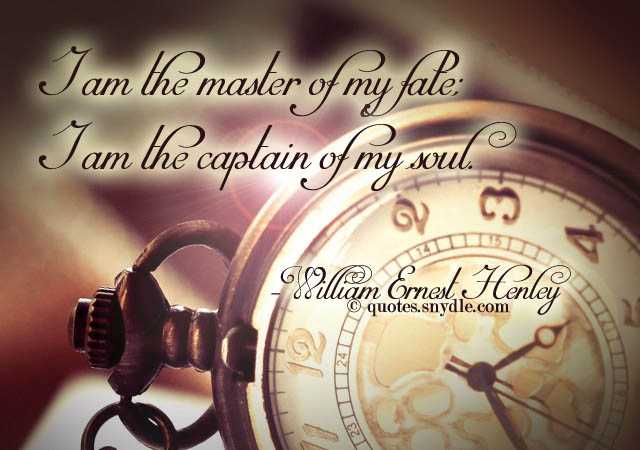 I am the master of my fate; I am the captain of my soul.
— William Ernest Henley

Everywhere man blames nature and fate, yet his fate is mostly but the echo of his character and passions, his mistakes and weaknesses.
— Democritus 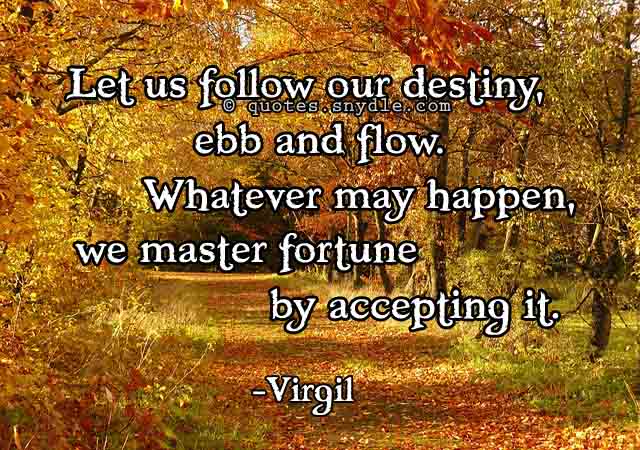 Let us follow our destiny, ebb and flow. Whatever may happen, we master fortune by accepting it.
— Virgil

The tissue of life to be we weave with colors all our own,
And in the field of destiny we reap as we have sown.
— John Greenleaf Whittier

A man’s happiness or unhappiness depends as much on his temperament as on his destiny.
— Francois de La Rochefoucauld

If fate means you to lose, give him a good fight anyhow.
— William McFee

Sometimes what we believe as coincidence is really just getting ourselves caught in an angel booby trap.
— Terri Guillemets

There is an unseen life that dreams us. It knows our true direction and destiny. We can trust ourselves more than we realize and we need have no fear of change.
— John O’Donohue

Fate is like a strange, unpopular restaurant, filled with odd waiters who bring you things you never asked for and don’t always like.
— Lemony Snicket 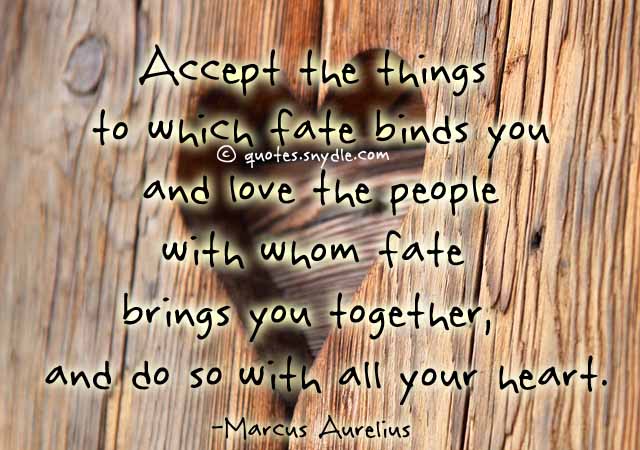 Accept the things to which fate binds you and love the people with whom fate brings you together and do so with all your heart.
— Marcus Aurelius

Love nothing but that which comes to you woven in the pattern of your destiny. For what could more aptly fit your needs?
— Marcus Aurelius

Sometimes fate brings two people together by causing one to misinterpret a smile.
— Robert Brault 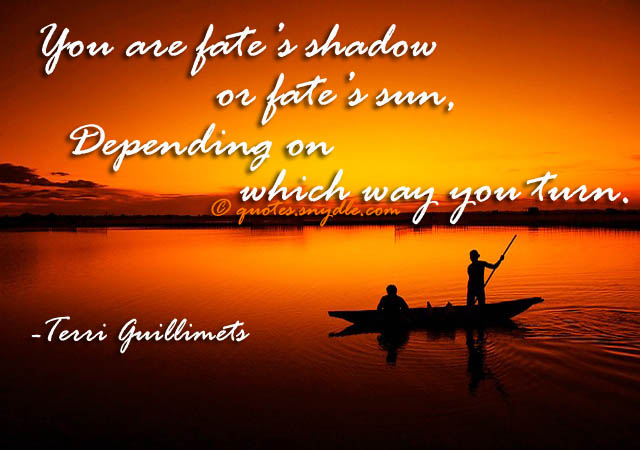 Adapt yourself to the life you have been given; and truly love the people with whom destiny has surrounded you.
— Marcus Aurelius

Failure and success seem to have been allotted to men by their stars. But they retain the power of wriggling, of fighting with their star or against it, and in the whole universe the only really interesting movement is this wriggle.
— E.M. Forester

He cannot complain of a hard sentence, who is made master of his own fate.
— Johann Friedrich von Schiller

You are where you are and what you are because of what you have done or failed to do. You are very much the architect of your own destiny.
— Brian Tracy