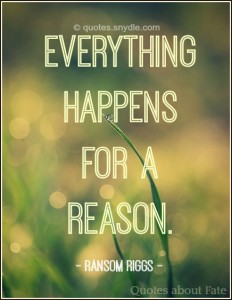 If there is a word people dread hearing it is the word Fate, because it speaks of inevitable destiny or necessity, ill fortune, doom and finality in important issues. Fate has made cowards of men because they try to find all ways and means to change the future and that is why astrology, consulting psychics and mediums, tarrot cards and reading the stars is so common place even in the most learned and educated. People are looking for answers to the frightening future.

However when you read quotes written by people through out the ages you will find that fate is not such a terrible thing as people fear. Enlightenment is a great source of joy because when you go through many of the quotes which talk about fate you begin to find hope and encouragement and the future does not seem so daunting after all.

If you are afraid of what is to come then find quotes that talk about fate in a positive light and have the courage to face the unknown. And even if the quotes talk about the other side of fate it is good to ponder and realize that there is no state that is permanent on earth, whether bliss or pain. Life has to happen to us and that is why good and bad things happen to all of us at one time or another. That is what being human is all about. 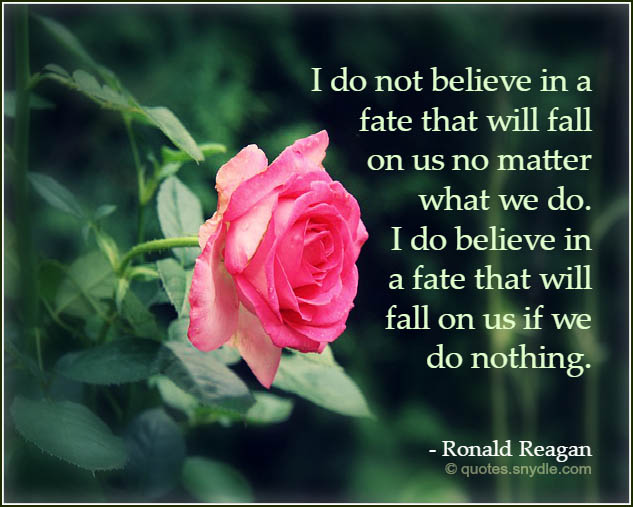 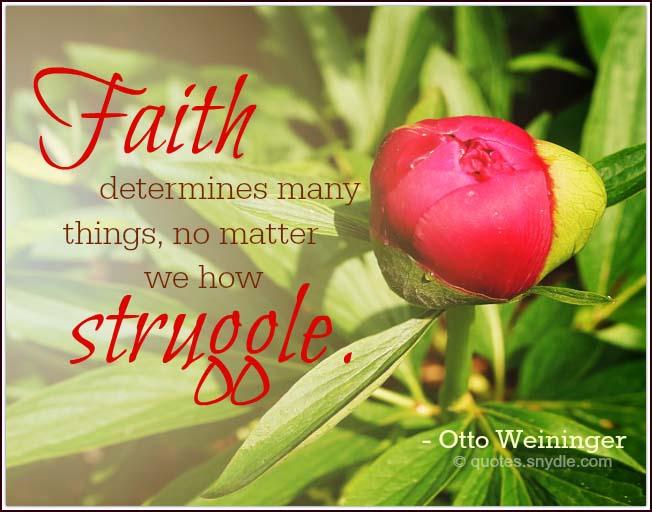 Fate determines many things, no matter how we struggle.
– Otto Weininger 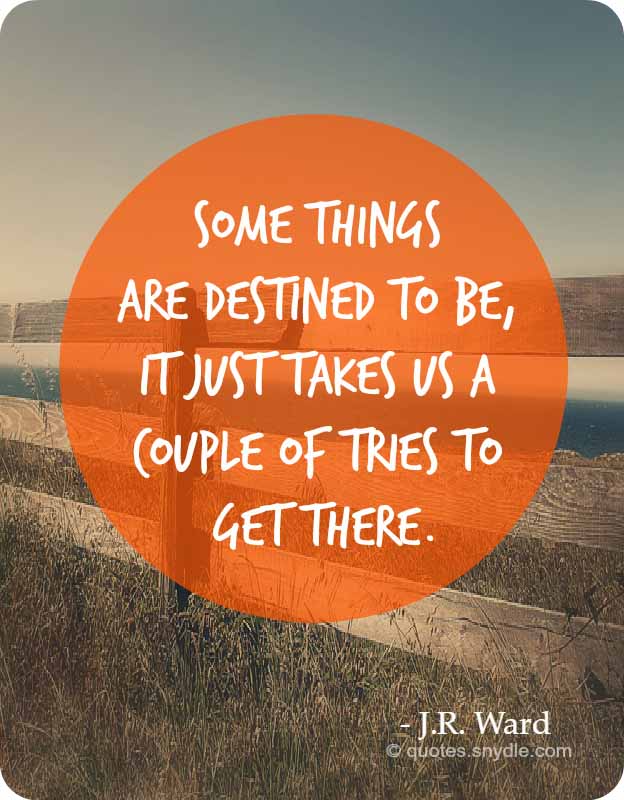 Some things are destined to be, it just takes us a couple of tries to get there.
– J.R. Ward 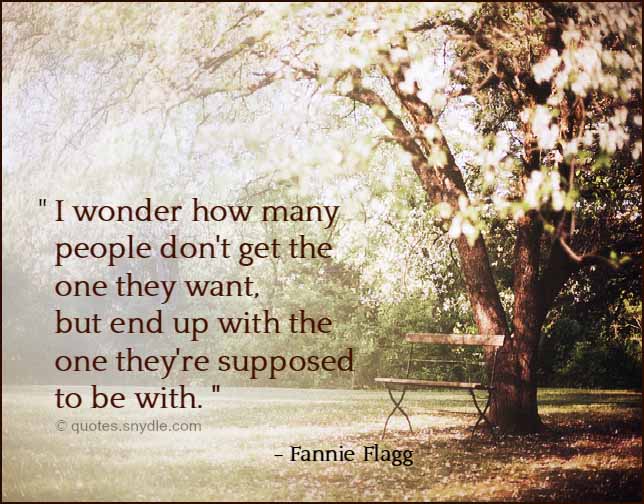 I wonder how many people don’t get the one they want, but end up with the one they’re supposed to be with.
– Fannie Flagg 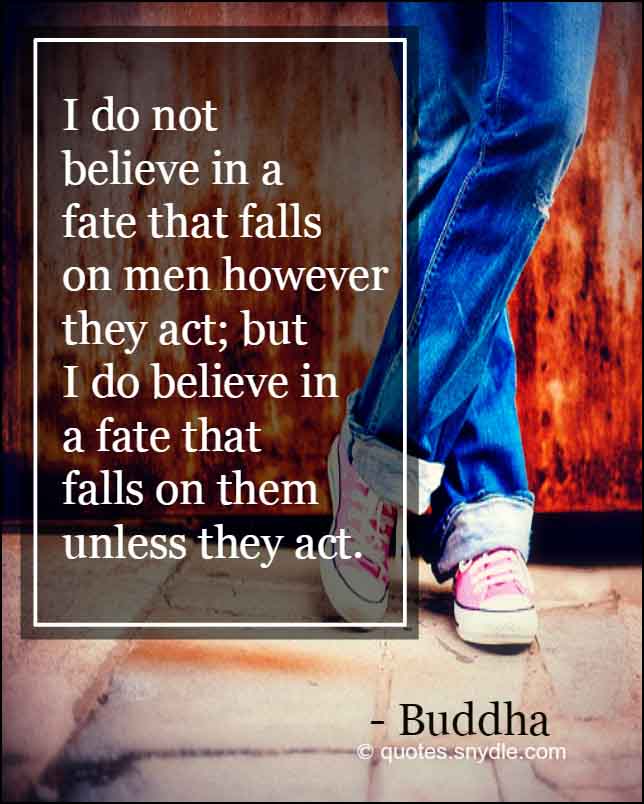 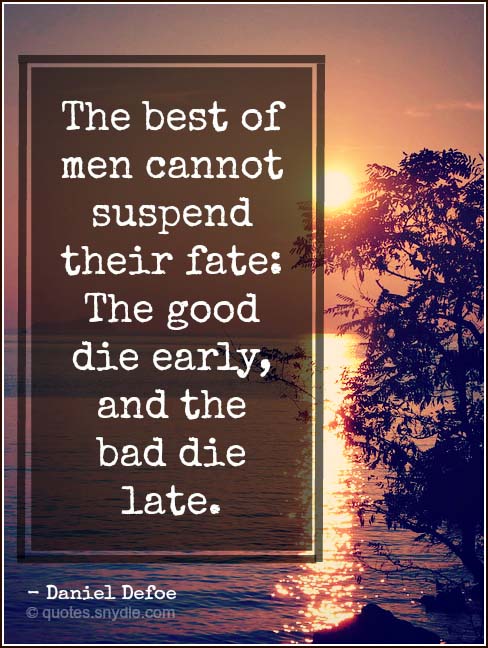 The best of men cannot suspend their fate: The good die early, and the bad die late.
– Daniel Defoe 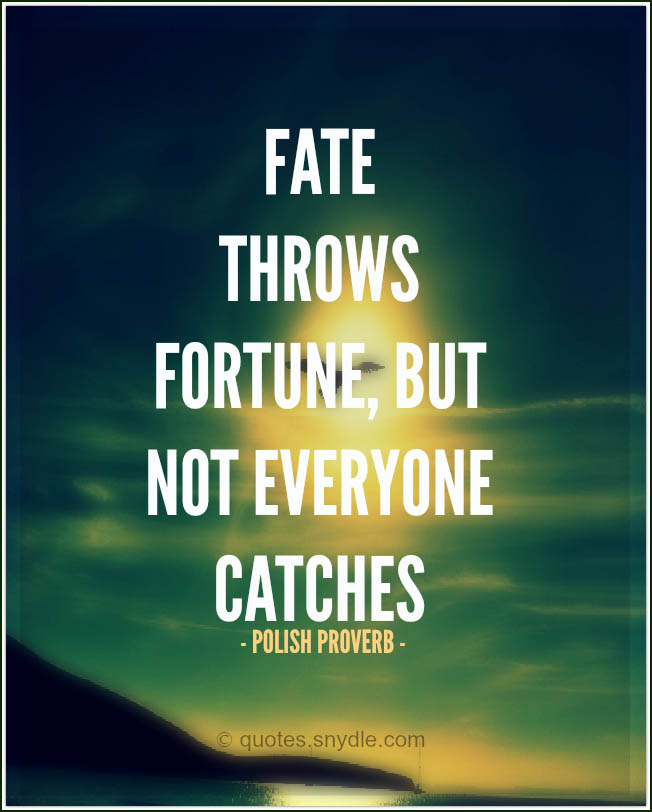 Fate throws fortune, but not everyone catches.
– Polish Proverb 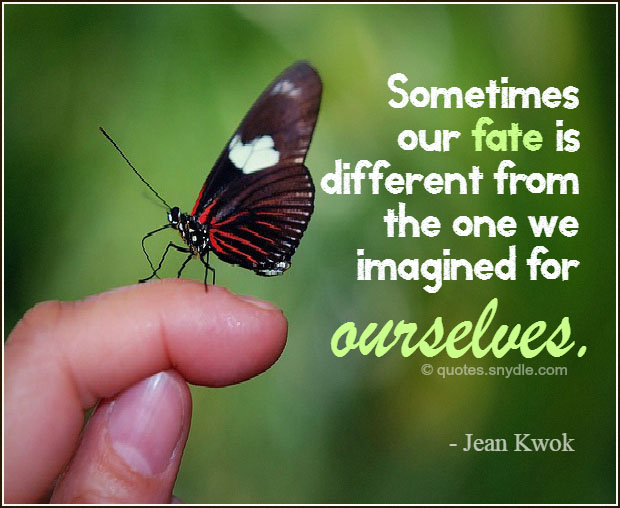 Sometimes our fate is different from the one we imagined for ourselves.
– Jean Kwok 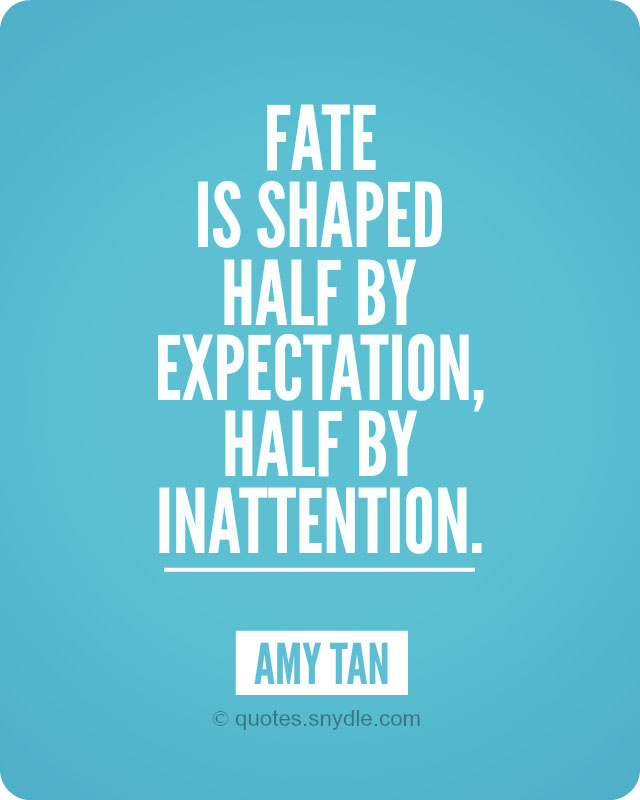 Fate is shaped half by expectation, half by inattention.
– Amy Tan

Just because Fate doesn’t deal you the right cards, it doesn’t mean you should give up. It just means you have to play the cards you get to their maximum potential.
– Les Brown

Knowing too much of your future is never a good thing.
– Rick Riordan

There is no such thing as accident; it is fate misnamed.
– Napoleon Bonaparte

When fate hands us a lemon, let’s try to make lemonade.
– Dale Carnegie

Disease can be cured; fate is incurable.
– Proverb

Whatever is going to happen will happen, whether we worry or not.
– Ana Monnar

Fate is by far the greatest mystery of all.
– Deanna Raybourn

Fate. You could never anticipate it.
– Nora Roberts 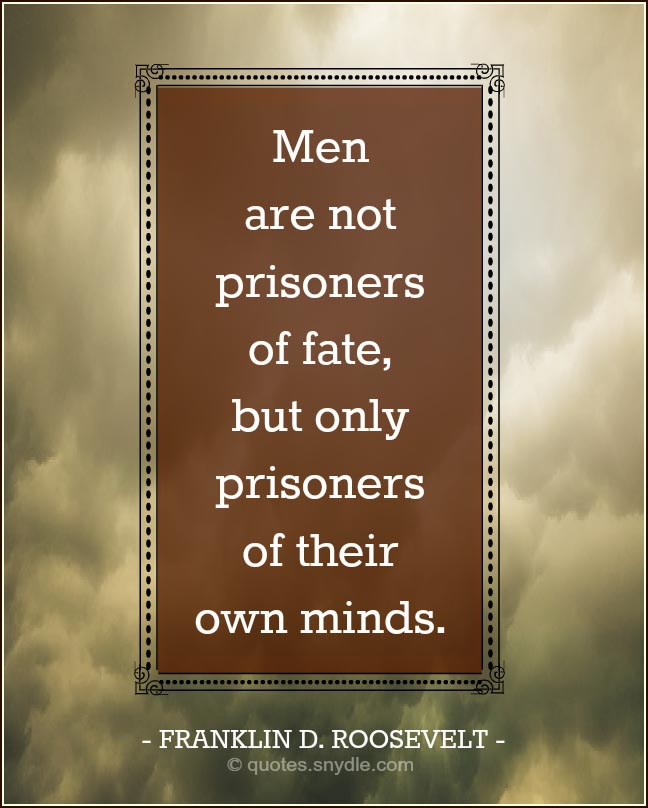 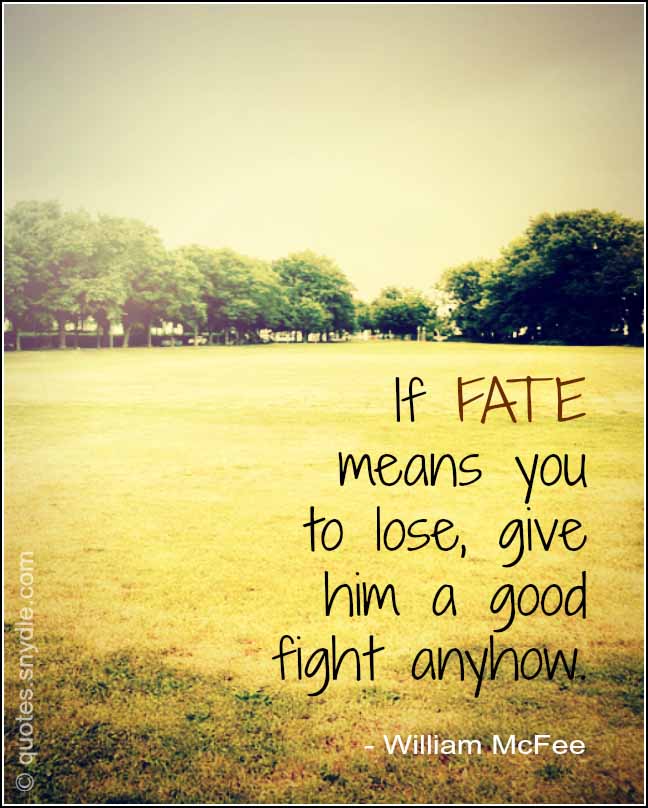 If fate means you to lose, give him a good fight anyhow.
– William McFee 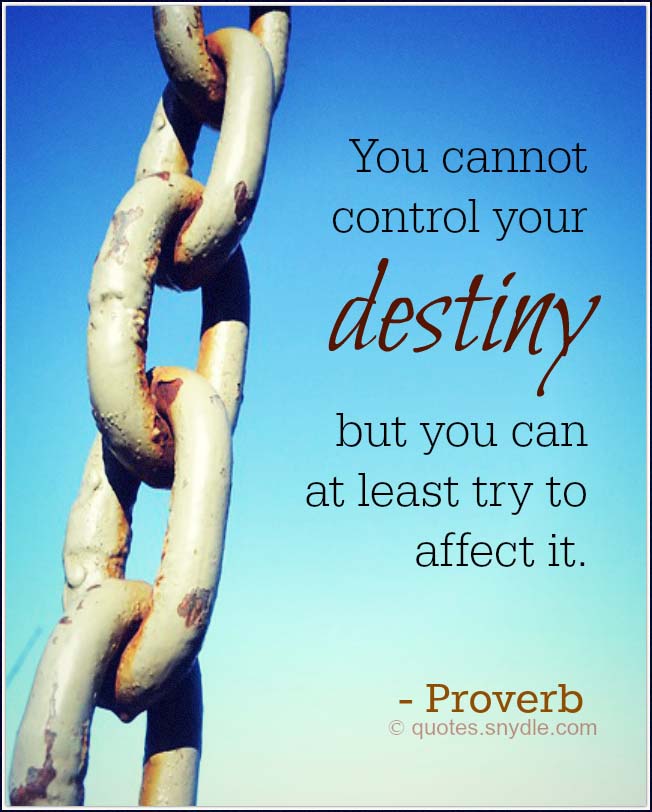 You cannot control your destiny, but you can at least try to affect it.
– Proverb

Life is what happens to you while you’re busy making other plans.
– Allen Saunders

We can’t choose our fate, but we can choose others. Be careful in knowing that.
– J.K. Rowling

We dream to give ourselves hope. To stop dreaming – well, that’s like saying you can never change your fate.
– Amy Tan

He that is born to be hanged shall never be drowned.
– Author Unknown

Destiny is a worrying concept. I don’t want to be fated, I want to choose.
– Jeanette Winterson

Fate is nothing but the deeds committed in a prior state of existence.
– Ralph Waldo Emerson

Sometimes, you have to manufacture your own history. Give fate a push, so to speak.
– Sarah Dessen

Do you wait for things to happen, or do you make them happen yourself? I believe in writing your own story.
– Charlotte Eriksson

We do not choose our fate, we can only choose if we accept it. Fate will take us where it will, whether we will it or not.
– Brenda Cothern

A person’s destiny is something you look back at afterwards, not something to be known in advance.
– Haruki Murakami

Quotes and Sayings about Fate 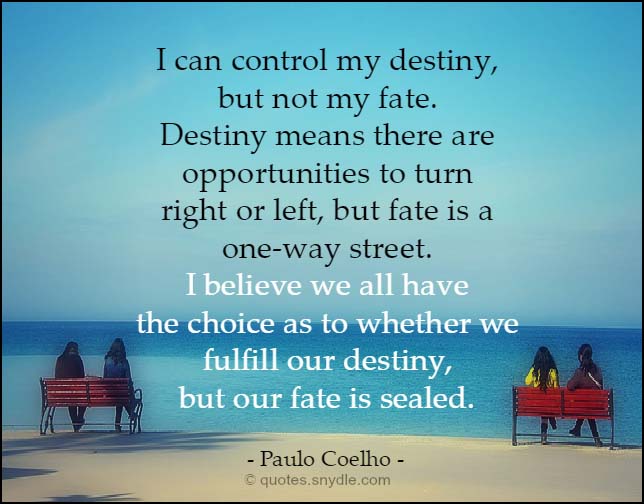 I can control my destiny, but not my fate. Destiny means there are opportunities to turn right or left, but fate is a one-way street. I believe we all have the choice as to whether we fulfill our destiny, but our fate is sealed.
– Paulo Coelho 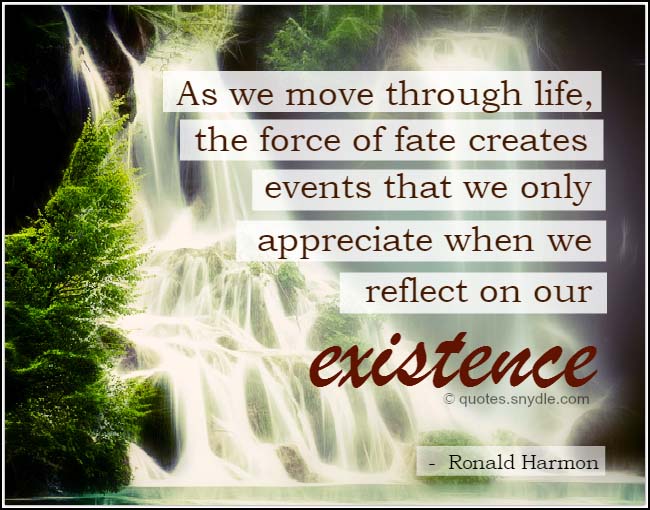 As we move through life, the force of fate creates events that we only appreciate when we reflect on our existence.
– Ronald Harmon

Fate is like a strange, unpopular restaurant filled with odd little waiters who bring you things you never asked for and don’t always like.
– Lemony Snicket

Man does not control his own fate. The women in his life do that for him.
– Groucho Marx

A man does not make his destiny: he accepts it or denies it.
– Ursula K. Le Guin

We seal our fate with the choices we make.
– Gloria Estefan

How a person masters his fate is more important than what his fate is.
– Karl Wilhelm von Humboldt

The man who glories in his luck may be overthrown by destiny.
– Euripides

We are all subject to the fates. But we must act as if we are not, or die of despair.
– Philip Pullman

If you try to cure evil with evil you will add more pain to your fate.
– Sophocles

Love cannot save you from your own fate.
– Jim Morrison

My fate is like those envelopes – sealed and tossed aside.
– Jenny B. Jones

Destiny finds those who listen, and fate finds the rest.
– Marshall Masters

The only thing that can happen to you, is what you do to your self.
– James O.

Love is not in our choice but in our fate.
– John Dryden