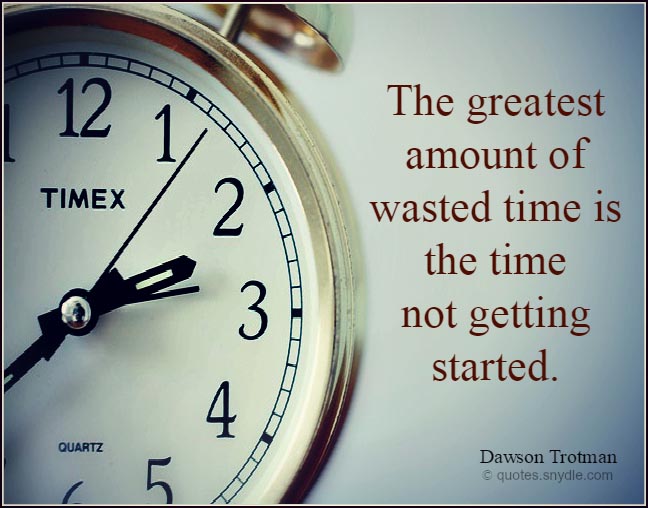 The greatest amount of wasted time is the time not getting started.
– Dawson Trotman 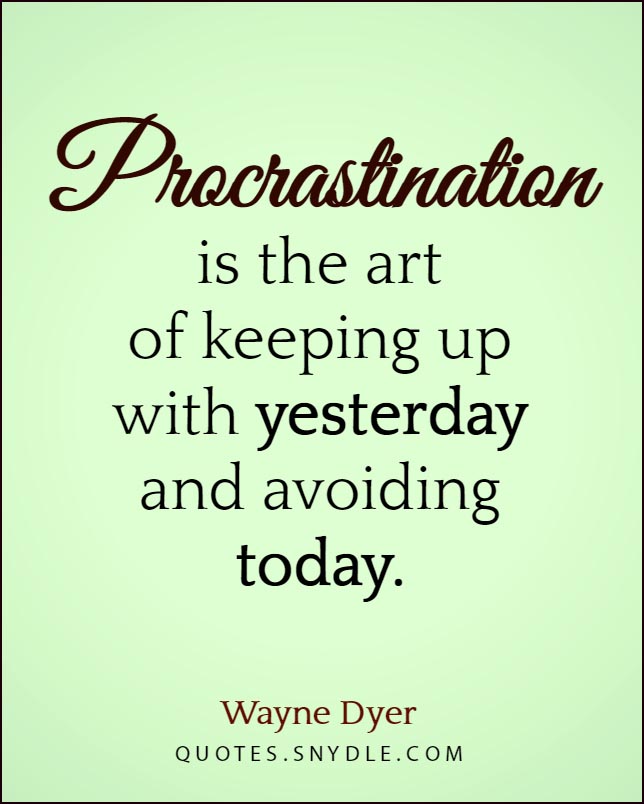 Procrastination is the art of keeping up with yesterday.
– Don Marquis 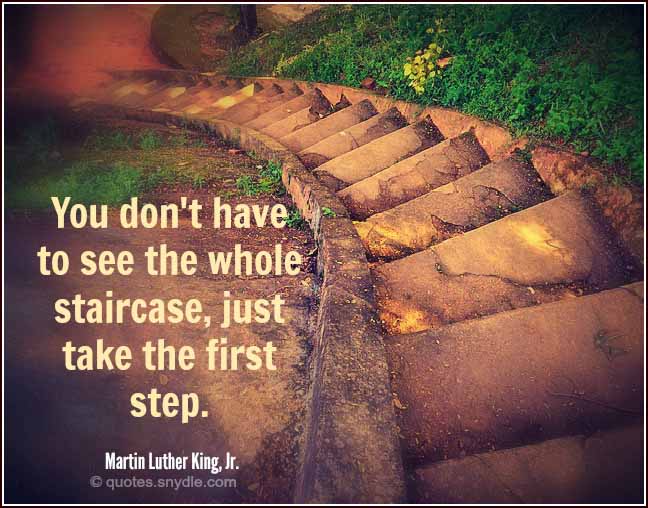 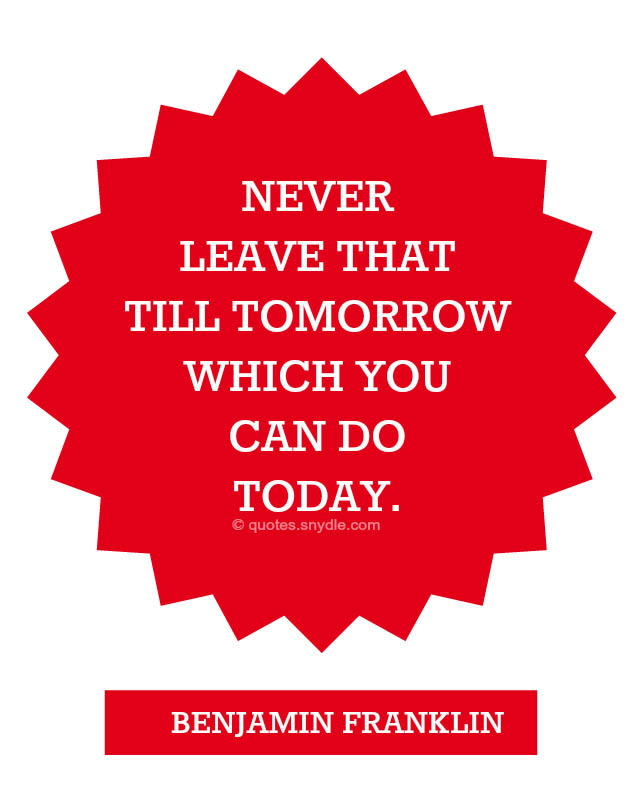 Never leave that till tomorrow which you can do today.
– Benjamin Franklin 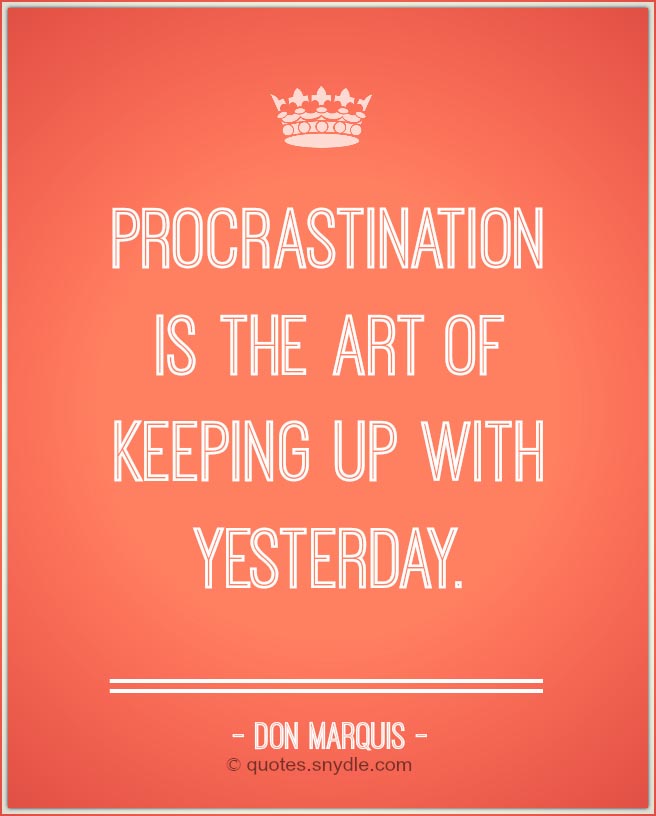 Procrastination is the art of keeping up with yesterday and avoiding today.
– Wayne Dyer 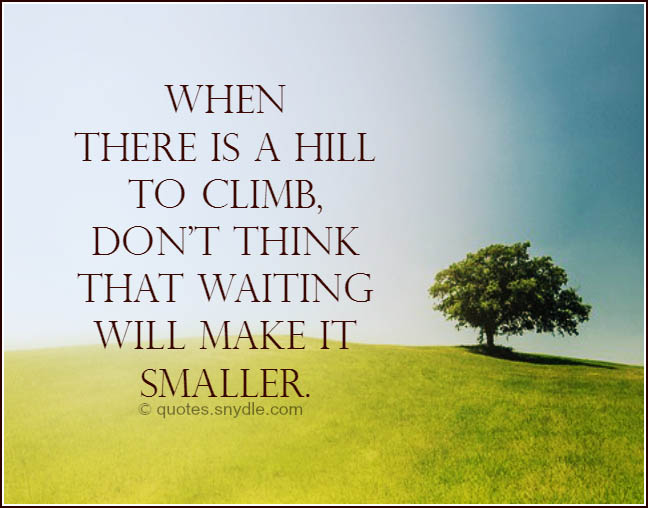 When there is a hill to climb, don’t think that waiting will make it smaller.
– Author Unknown 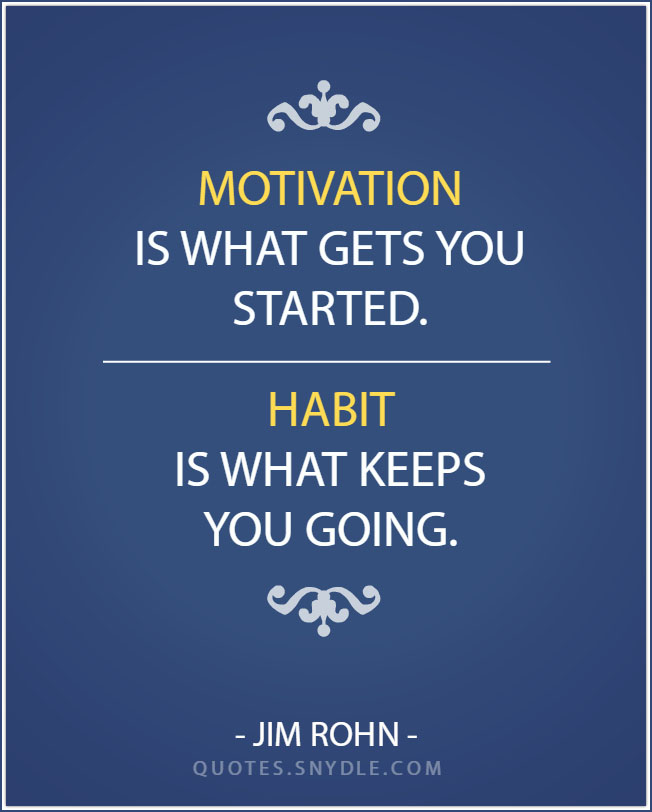 Motivation is what gets you started. Habit is what keeps you going.
– Jim Rohn 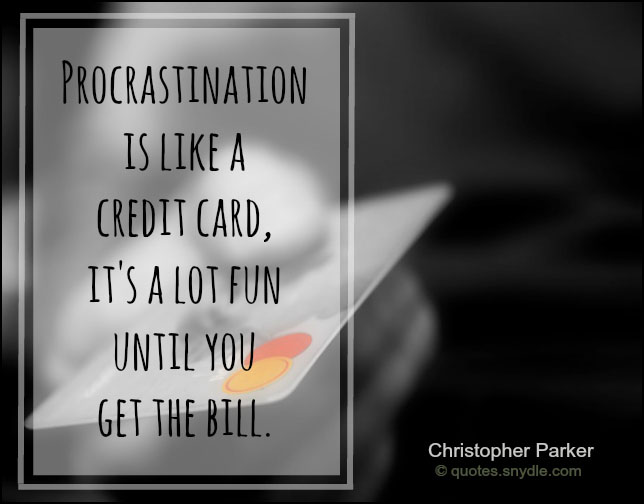 Procrastination is like a credit card: it’s a lot fun until you get the bill.
– Christopher Parker 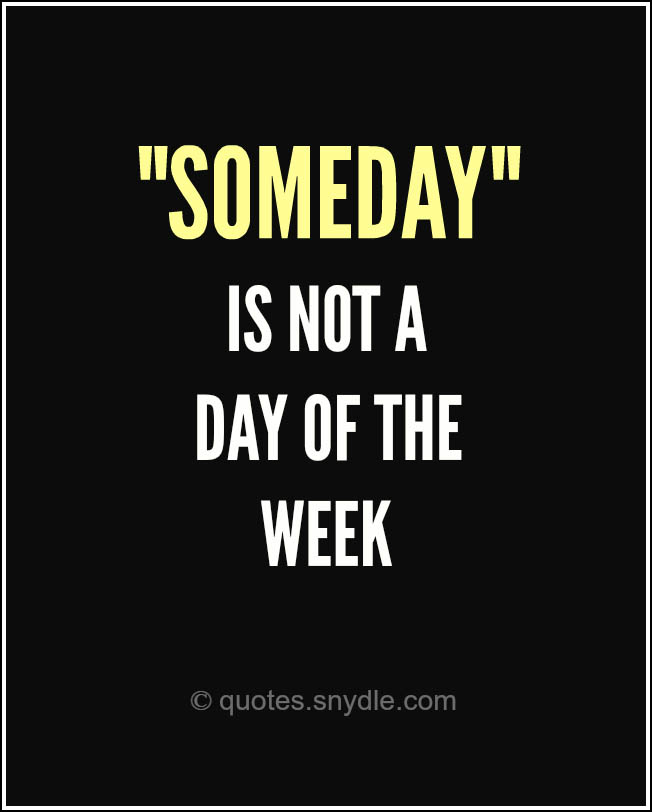 Someday is not a day of the week.
– Unknown 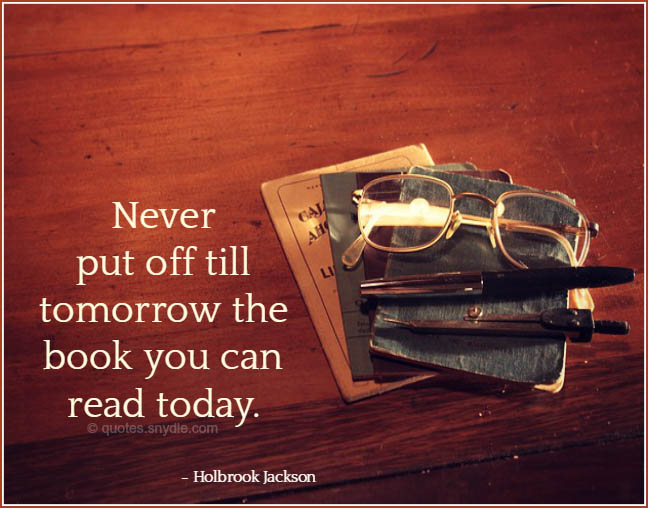 Never put off till tomorrow the book you can read today.
– Holbrook Jackson 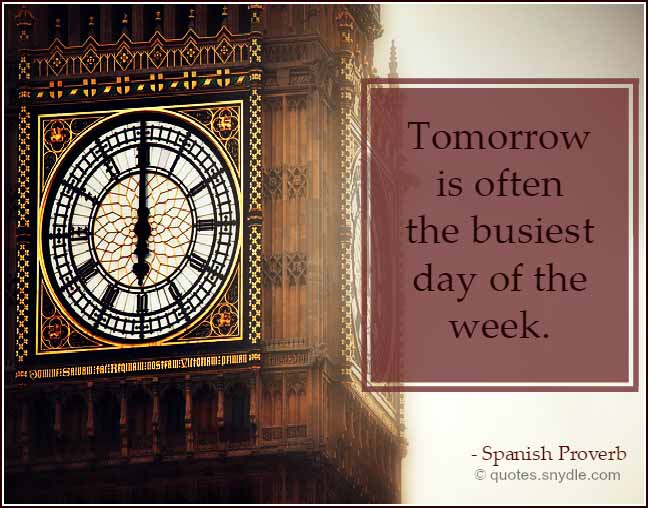 Tomorrow is often the busiest day of the week.
– Spanish Proverb 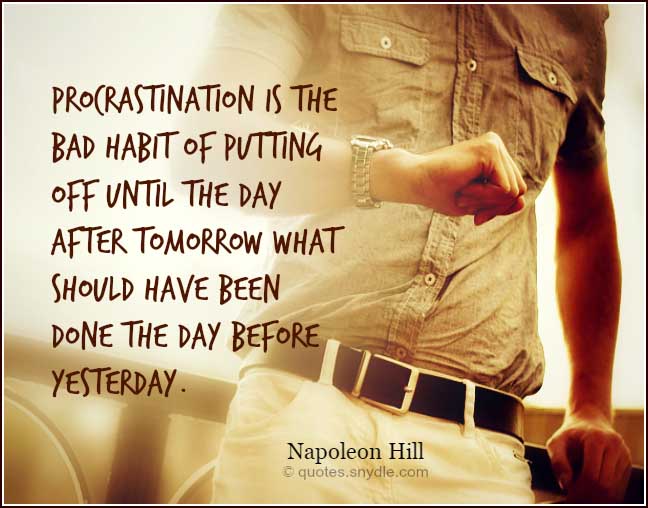 Procrastination is the bad habit of putting off until the day after tomorrow what should have been done the day before yesterday.
– Napoleon Hill

Yesterday is a cancelled check. Tomorrow is a promissory note. Today is the only cash you have, so spend it wisely.
– Kim Lyons.

Procrastination and fear are the enemies of success; the war is lifelong, but the battles are daily.
– Noel DeJesus

Working is one of the most dangerous forms of procrastination.
– Gretchen Rubin

Procrastination is the grave in which opportunity is buried.
– Unknown

Procrastination has robbed us of too many opportunities.
– Sarah Ban Breathnach

Procrastination is the thief of time.
– Edward Young 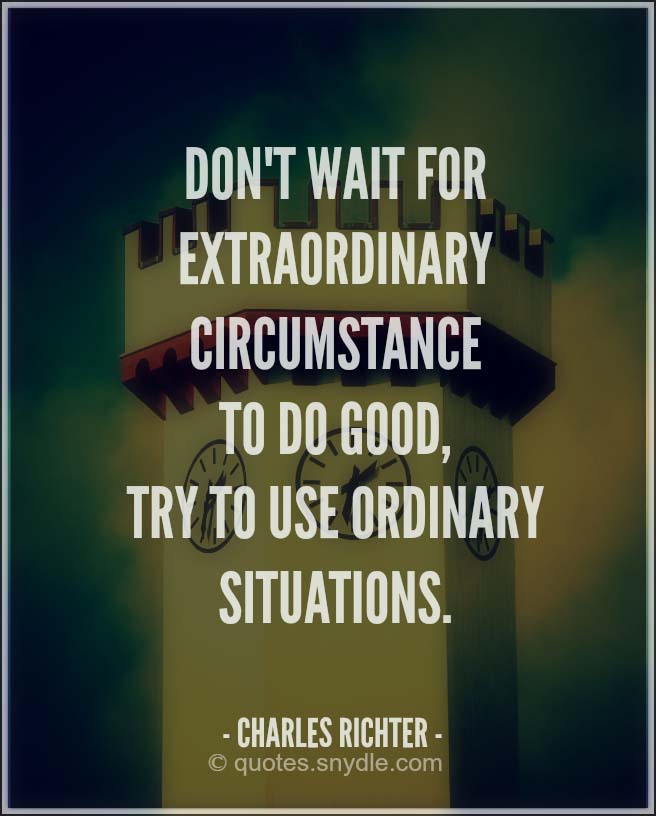 Don’t wait for extraordinary circumstance to do good, try to use ordinary situations.
– Charles Richter

It’s time to stop following your dreams and time to start chasing them!
– Habeeb Akande

You may delay, but time will not.
– Benjamin Franklin

The way to get started is to quit talking and begin doing.
– Walt Disney

You cannot escape the responsibility of tomorrow by evading it today.
– Abraham Lincoln

To think too long about doing a thing often becomes its undoing.
– Eva Young

There are a million ways to lose a work day, but not even a single way to get one back.
– Tom DeMarco and Timothy Lister

Only put off until tomorrow what you are willing to die having left undone.
– Pablo Picasso

Today is the new tomorrow, Do it now.
– Abdelrahman Ashraf Abuzied

You don’t know what you have until you use it. You don’t have to wait until you lose it.
– Constance Chuks Friday

Much of the stress that people feel doesn’t come from having too much to do. It comes from not finishing what they started.
– David Allen

If you want to make an easy job seem mighty hard, just keep putting off doing it.
– Olin Miller

Things may come to those who wait, but only the things left by those who hustle.
– Abraham Lincoln

Procrastination is one of the most common and deadliest of diseases and its toll on success and happiness is heavy.
– Wayne Dyer

Quotes and Sayings about Procrastination 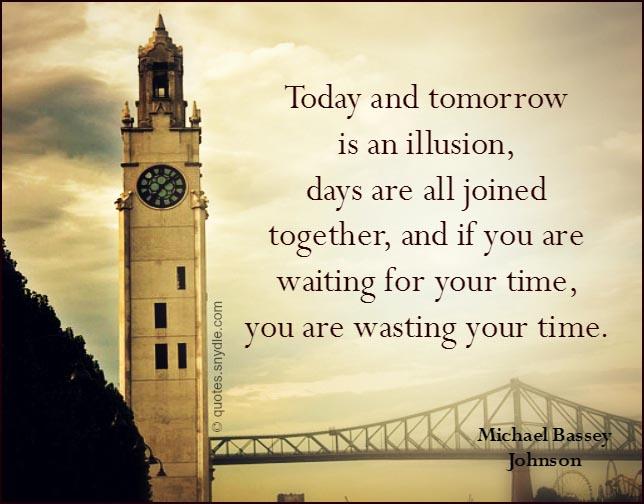 Today and tomorrow is an illusion, days are all joined together, and if you are waiting for your time, you are wasting your time.
– Michael Bassey Johnson

The sooner I fall behind, the more time I have to catch up.
– Author Unknown

Begin doing what you want to do now.
– Marie Beynon Ray

Even if you’re on the right track-you’ll get run over if you just sit there.
– Will Rogers

Tomorrow is the only day in the year that appeals to a lazy man.
– Jimmy Lyons

God has promised forgiveness to your repentance, but He has not promised tomorrow to your procrastination.
– Augustine of Hippo

When it comes to eating right and exercising, there is no “I’ll start tomorrow.” Tomorrow is disease.
– Terri Guillemets

When it comes to death, procrastination is encouraged.
– D.E. Navarro

Following-through is the only thing that separates dreamers from people that accomplish great things.
– Gene Hayden 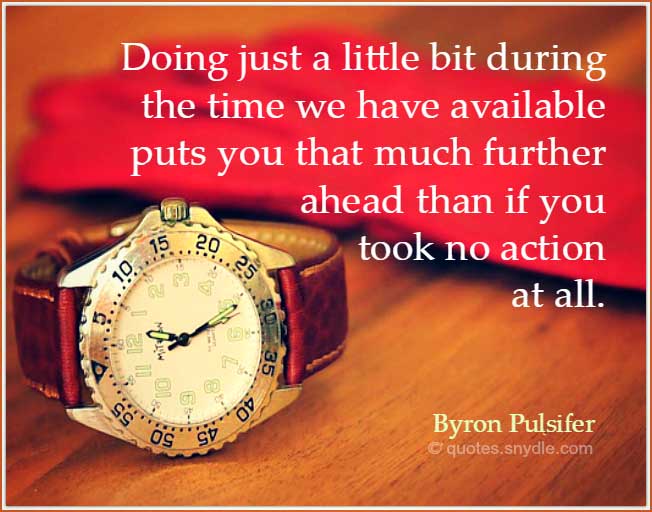 Doing just a little bit during the time we have available puts you that much further ahead than if you took no action at all.
– Byron Pulsifer

Do the hard jobs first. The easy jobs will take care of themselves.
– Dale Carnegie

One of the greatest labor-saving inventions of today is tomorrow.
– Vincent T. Foss

The really happy people are those who have broken the chains of procrastination, those who find satisfaction in doing the job at hand. They’re full of eagerness, zest, productivity. You can be, too.
– Norman Vincent Peale

The two rules of procrastination: 1) Do it today. 2) Tomorrow will be today tomorrow.
– Author Unknown

He that is good for making excuses is seldom good for anything else.
– Benjamin Franklin

It is easier to resist at the beginning than at the end.
– Leonardo da Vinci

Clutter is the physical manifestation of unmade decisions fueled by procrastination.
– Chistina Scalise

One of the very worst uses of time is to do something very well that need not to be done at all.
– Brian Tracy